DK Shivakumar was taken into custody by the Enforcement Directorate which has been questioning him in a money laundering case. 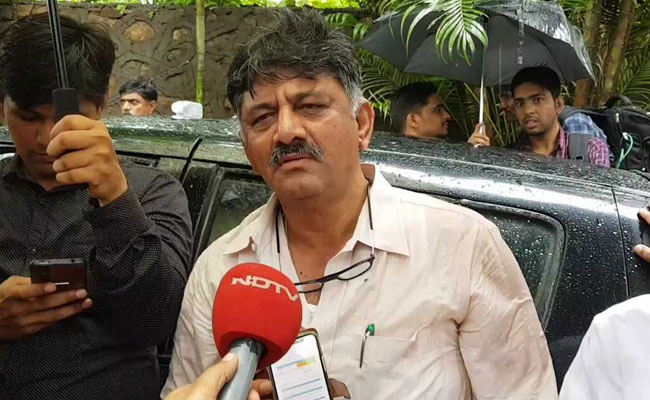 Shivakumar was arrested under Prevention of Money Laundering Act (File)

Former Karnataka Minister DK Shivakumar's arrest is an attempt by the centre to distract the masses from their "failed policies" and the "sorry state" of the economy, the Congress said on Tuesday, after the leader was taken into custody by the Enforcement Directorate, which has been questioning him in a money laundering case.

"We strongly condemn the high-handed tactics and vendetta politics being deployed against Congress leaders. The arrest of DK Shivakumar is yet another attempt by the government to distract the public from their failed policies and the sorry state of the economy," the Congress tweeted.

On Tuesday, Mr Shivakumar, considered to be the Congress's troubleshooter in Karnataka, was questioned for the fourth day by the Enforcement Directorate in the money laundering case. The agency claimed that he was not cooperating with the investigation.

Mr Shivakumar was summoned to the national capital last Thursday by the probe agency after a court dismissed his request for protection from arrest.

We strongly condemn the high-handed tactics & vendetta politics being deployed against Congress leaders. The arrest of Shri @DKShivakumar is yet another attempt by the govt to distract the public from their failed policies & the sorry state of the economy.#BJPVendettaPolitics

After landing in Delhi from Bengaluru, the leader had said that he would cooperate in the investigation.

"It is my duty (to appear).... I have to respect the law. We are lawmakers and law abiding citizens. They (ED) have summoned me... I don't know why they have called me under Prevention of Money Laundering Act (PMLA)," he was quoted by news agency PTI.

"But, let me see, hear them. I am ready to face them (ED)," he had told reporters outside the ED office.

Despite full cooperation in investigation @DKShivakumar is arrested by ED.

This is political vendetta & High handed tactics against @INCIndia by @BJP4India

Congress stands firmly with DKS & will fight this legally & politically.

Mr Shivakumar had played a crucial role in keeping the Congress's flock together after the assembly election last year. The party went onto to stitch a post-poll alliance, denying the BJP-- the single largest party-- an opportunity to form a government.

He also tried to bring back the Congress-JDS MLAs, who had resigned from the assembly in July, triggering a political crisis in the state. The Karnataka government, however, collapsed eventually after it failed a trust vote.

The Enforcement Directorate had conducted raids on Mr Shivakumar in August 2017. Sources said they had recovered more than Rs. 300 crore in "undisclosed income".

Mr Shivakumar's arrest follows that of his party colleague, former Union minister P Chidambaram in a case involving media company INX Media. The Central Bureau of Investigation, which made the arrest last month after a day of dramatic developments, contended that he was not cooperating with the investigation.