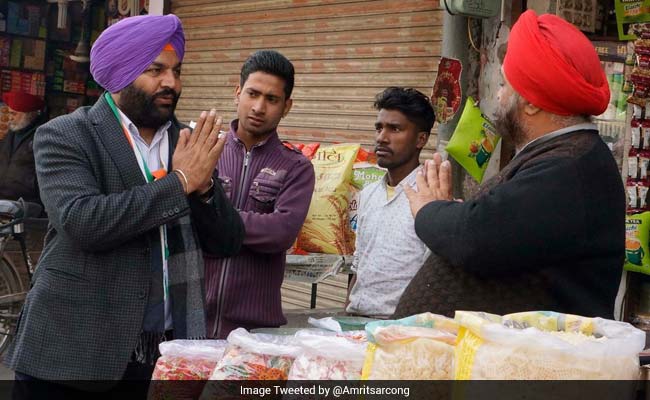 Chandigarh: Congress candidate Gurjit Singh Aujla won the Amritsar Lok Sabha seat on Saturday with a huge margin of 1,99,189 votes over nearest rival Rajinder Mohan Singh Chhina of the BJP. The by-poll was held simultaneously with the Punjab Assembly elections.

The seat was earlier represented by Captain Amarinder, who had defeated the incumbent Union Finance Minister Arun Jaitley in a high profile battle during the 2014 general elections.

The Amritsar Lok Sabha seat was earlier represented by Navjot Singh Sidhu, who won it on three occasions as a BJP candidate.

However, Mr Sidhu this year joined the Congress and fought the assembly elections from Amritsar East constituency, which he won.

Mr Chhina has been BJP's Punjab state vice president earlier and is now its executive member. He had unsuccessfully contested the 2007 assembly polls from the Amritsar West seat.

Promoted
Listen to the latest songs, only on JioSaavn.com
Mr Aujla, who is considered close to Captain Amarinder, was appointed vice president of the Amritsar District Youth Congress in 1997 and has been District Congress Committee (Rural) president since 2013.

Having been represented by Gurmukh Singh Musafir and then RL Bhatia, the Amritsar Lok Sabha had traditionally remained a Congress bastion until Najvot Singh Sidhu, entered the fray as a BJP candidate and wrested it in 2004 parliamentary elections. From 2004, the seat remained with Mr Sidhu till 2014.