Former Congressman and incumbent Deputy Chief Minister Chandrakant Kavlekar is among the 10 named. 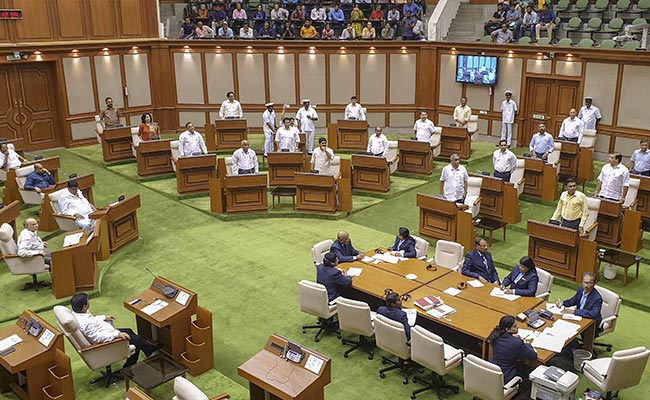 The Congress in Goa on Wednesday filed a complaint of cheating and forgery with the police against the 10 former MLAs who had defected to the BJP in 2019 accusing them of preparing a fake document regarding the merger of their parent party, a day after the Assembly Speaker dismissed the disqualification petitions against them.

In a major relief for the BJP government in Goa, Speaker Rajesh Patnekar on Tuesday dismissed disqualification petitions against 12 MLAs, including the 10 former Congress legislators who crossed over to the ruling party in 2019.

The BJP currently has 27 MLAs in the 40-member house.

Mr Chodankar had filed a disqualification petition against the 10 MLAs who switched sides in 2019. The MGP's Sudin Dhavalikar had filed a similar plea against two of the party MLAs who joined the ruling party in the same year.

As per the plaint, "the accused conspired together and created a false document claiming to be a resolution of the Goa Pradesh Congress Committee (GPCC) dated July 10, 2019, merging the party in the Goa Legislative Assembly (the Congress Legislative Party) into the BJP".

"The aforesaid document is created illegally using counterfeit letterhead and counterfeit seal of the GPCC," the complaint stated.

It said the document was produced by the accused in their written statement filed before the Speaker of the Goa Assembly "as their defence" in connection with the disqualification petition.

A Panaji police station official said they have received the complaint.