Congress leader Kapil Sibal said, "The biggest scam in India's history is demonetisation. It is sad that our agencies will investigate the opposition, but not those in power" 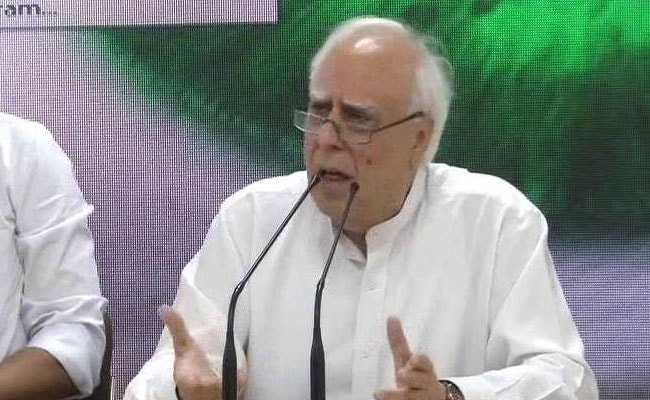 The Congress has alleged that the Election Commission is not taking any action against the ruling BJP despite the many reports of of poll code violation against them. The party also showed a video, claiming it was an expose on currency exchange conducted by the government after demonetisation.

The exchange, Mr Sibal said at a media conference on Tuesday, was conducted by a special team drawn from officials from all departments and it was headed by BJP chief Amit Shah. Under it, currency from various ministers and business houses were brought in planes to Hindon air base from where it was taken to the Reserve Bank -- at a charge of 35 to 40 per cent.

Legitimate action against corruption is not vendetta https://t.co/7jD8t20B0U

"The biggest scam in India's history is demonetisation... It is sad that our agencies will investigate the opposition, but not those in power," Mr Sibal said, hinting at the series of investigations and raids that have been taking place over the last weeks.

But despite the existence of many such sting videos, no agency would undertake any investigation, he said. This, he said, was the case with all agencies in the country, including the Election Commission.

"We have given them (the Election Commission) so many complaints. They are not acting and we don't have the time to go to court since there is hardly any time," senior party leader Kapil Sibal told the media today. The first phase of the national elections will be held on Thursday.

The opposition has been facing a series of raids that have been coming with clockwork regularity. It started last month with raids on people linked to leaders of the Congress-JDS coalition in Karnataka. The last took place at properties owned by the aides of Madhya Pradesh Chief Minister Kamal Nath.