Congress Bathinda Nominee's Wife Says It Is A "One-Sided" Contest 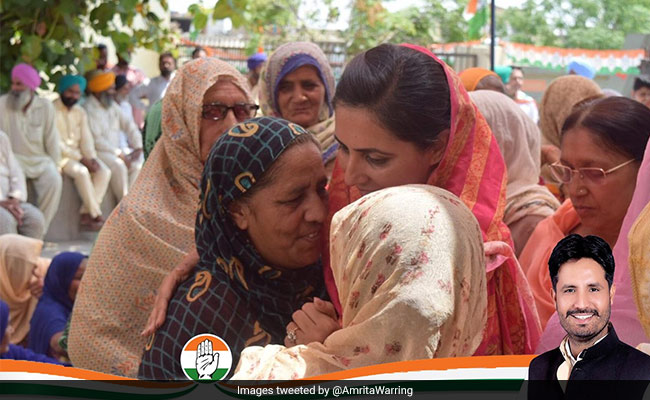 She claimed that the contest for the high-profile seat is a "one-sided" affair in favour of her husband.

Campaigning aggressively in the villages of the Bathinda Lok Sabha constituency, Amrita Warring lamented that the problem of drinking water and the lack of basic infrastructure were the major issues faced by the people.

"I have so far covered 190 villages and I am very sad to see their plight. Every villager is asking for basic facilities like roads, schools etc," she said.

Amrita Warring further claimed that many villages do not even have drinking water facilities and people were faced with hardships.

She further added, "There is no drinking water in any village I visited, and women there told me that due to shortage of water, they do not take bath for at least two days."

Exuding confidence in her husband's victory, Warring said, "There is great enthusiasm among the people for Raja Warring. People are supporting him. It is no more a fight. I would say it is a one-sided contest."

"Before coming to Bathinda for campaigning, I had an impression that there would be so much development as Harsimrat had been it's MP for 10 years. But I was shocked to see the plight of the villages," she said.

Amrita Warring, who runs an NGO called "Aasra", claimed that Harsimrat Kaur had not brought any big industrial project to the constituency to provide impetus to the local economy.

"Apart from the AIIMS, there is nothing else in the 550 villages of the Bathinda constituency," she said.

Amrita Warring also accused the Union minister and two-time lawmaker of not bringing any food processing project to the constituency despite holding the portfolio.

"She is a food processing minister and she has not been able to bring a single unit. She could have brought a juice making unit or a packed food industry. She had so much power but could not do anything for her area," she said.

Amrita Warring has been holding several public meetings while campaigning for her husband in the villages of the area.

"I am not going to villages and meeting people as a politician. I am doing this as the better half of Raja Warring. I feel connected to the people," she said.

Traditionally, the Bathinda Lok Sabha constituency is considered to be a stronghold of the Shiromani Akali Dal (SAD) as its candidates have won from this seat on eight occasions.

The SAD has fielded Harsimrat Kaur for the third time from the seat.
Congress, the ruling party in the state, has given the ticket to Raja Warring, the sitting legislator from Gidderbaha, while the Aam Aadmi Party (AAP) has fielded Talwandi Sabo legislator Baljinder Kaur.

Polling would be held in all 13 Lok Sabha seats in Punjab on May 19.

(This story has not been edited by NDTV staff and is auto-generated from a syndicated feed.)
Comments
Bhatinda electionsHarsimrat Kaur Badal