In a series of tweets, Randeep Surjewala began his attack on the central government with a pointed question on H-1 B visas that allows US employers to temporarily hire citizens of other countries. 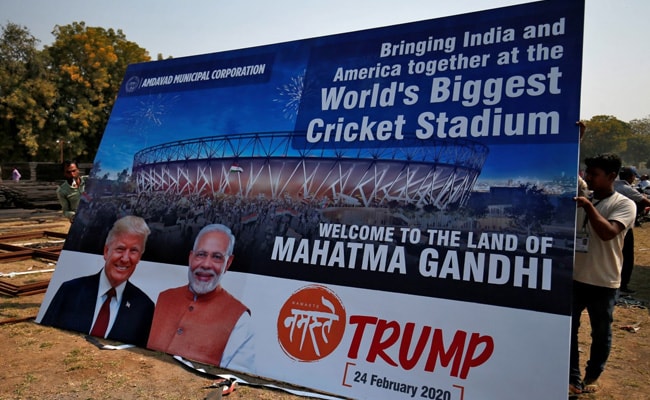 Donald Trump will begin his two-day visit to India on Monday.

Mr Surjewala, who slammed the central government in a series of tweets this morning, began his attack with a pointed question on H-1 B visas that allows US employers to temporarily hire citizens of other countries.

"Will PM Modi ask for easing H-1B visas?" he asked, referring to PM Modi-President Trump bomhomie, which was evident at the "Howdy, Modi!" event in Texas, US, last year attended by more than 50,000 people.

The US-Taliban deal, which will be signed at the end of this month and has been termed by Russia as an "important event for peace", also figured in one of the tweets by the 52-year-old Congress leader as he raised concern about national security.

"US prepares to sign deal with Taliban on 29 Feb. What about India's red lines! Have we forgotten IC814hijacking & release of terrorist Masood Azhar in Kandhar,who's JeM then attacked Parliament & Pulwama? As gala bash unfolds,Will Modiji raise our National Security concerns? (sic)" he wrote in another post.

Indian Airlines flight IC-814 was hijacked on its way back to Delhi from Kathmandu, half an hour after take off on December 24, 1999, with 180 passengers and crew on board. It was one of the most dramatic hostage crisis the country has ever seen before 26/11 Mumbai terror attacks.

Mr Surjewala's third question - Will PM Modi "ensure restoration" of preferential trade treatment for India that allowed duty-free entry for $5.6 billion worth of the country's exports to the United States?

It has affected the $5.6 billion Indian exports to the US, especially gems,jewellery,rice,leather

The general system of preferences (GSP) was scrapped by the US last year. The Congress has been taking shots at PM Modi over the issue. On Friday, another senior Congress leader Anand Sharma said:"This visit should not be reduced to a photo opportunity or a PR exercise that would devalue the importance of our partnership... that would also not be in India's national interest."

Amid strained ties between US and Iran over a host of issues, Mr Surjewala also asked if PM Modi would be able to secure cheaper oil for India.

As fest continues in AMD, Will Modiji secure cheaper oil for India? pic.twitter.com/jAyBfIFHtD

As India commits to $3 billion Defense purchases, why zero relief for India's export of steel?@POTUS says America First, why is PM quiet on India First? pic.twitter.com/W84Qfikky2

The Congress has been constantly targeting the central government over President Trump's India visit.

US President Donald Trump, accompanied by wife Melania, daughter Ivanka, son-in-law Jared Kushner, will land in Ahmedabad in PM Modi's home state Gujarat on Monday. From the airport, PM Modi will take him on a roadshow to the world's largest cricket stadium in the city's Motera. They will then travel to Agra to see the Taj Mahal before reaching Delhi for the operative part of the visit.

During the visit, India and the US are also likely to discuss mutually agreeable trade terms, though reports say the chances of a big trade deal coming through is slim. President Trump has been highlighting what he calls high tariffs by India and is seeking wider access to the Indian market.