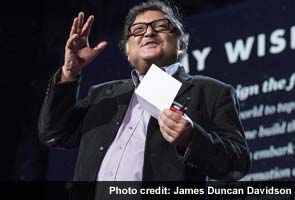 Long Beach, California: Sugata Mitra on Tuesday was awarded a million-dollar TED Prize to pursue the promise of building schools in the Internet cloud where young minds can learn unfettered by grown-ups.

Mitra's journey to the prestigious TED gathering in the Southern California city of Long Beach began more than a decade ago in Delhi, when he stuck a computer in a hole in a slum wall to see what the children would do. (Read Sugata Mitra's blog here)

"I left it to the wolves, so to speak, knowing it would be smashed open and sold," Mitra said of that day in 1999.

"Eight hours later I came back to find them browsing the Internet in English," he recalled. "I realized I had accidentally stumbled onto something universal."

What the physicist-turned-educator seemingly stumbled upon was a way of teaching children better suited for workplaces, cultures and economies increasingly driven by fast-changing technology.

His experiment was reproduced in an array of countries and communities with the same result: children can drive their own educations if provided access to the Internet and nudged by adults who also stay out of the way.

"They can cluster around the machine, then you sit back and watch," Mitra said of self-guided learning.

"The more you ask them to sit quietly in rows and columns, that is when the fights break out," he said in a reference to traditional classroom set-ups.

Mitra was the first person to receive a TED Prize since the cash award was increased tenfold to a million dollars.

The award also comes with the ability to tap into the abilities, insights and influence of a TED community devoted to the idea of "ideas worth spreading."

Mitra, a university professor in Britain, said the prize money would fund a learning lab in India devoted to perfecting a formula for the School in the Cloud.

Classes will be overseen by a global network of retired teachers who connect with classes by online video chats, but an adult will be on-site to keep watch.

"I want to see if this is feasible," Mitra said. "If it works, it will level the playing field."

Mitra reasons that the traditional focus in schools on reading, writing, and arithmetic comes from a time when societies were cranking out workers for office jobs, government posts or the like.

As technology frees people from offices and creates jobs yet to be imagined, it is time to let children learn in ways that let them pursue and embrace new ideas, he argues.

"There may be ten different ways to produce the next generation," Mitra said. "I think I have touched the tip of one of those icebergs."

Mitra's plans for tapping into the TED community include asking for help getting solar power for his lab and calling for help in the event of trouble.

"Sugata has not only created a remarkable body of research around self-directed learning, but he has support from teachers around the world who are tapping into his methodology with great success," said TED Prize director Lara Stein.

"We are thrilled to support his wish, and are excited for him to delve deeper, build his lab in India, and provide a platform for educators and parents around the world who wish to explore this model."

Promoted
Listen to the latest songs, only on JioSaavn.com
Mitra laughingly conceded that the model works smoothly until school children hit their teen years and hormones kick in. Then, he said, making a game of the learning seems to get them working."

Stein also announced a collaboration with the Sundance Institute to have a filmmaker document the TED Prize winner's progress over the next 18 months.