Commend Musharraf for crossing LoC to be with troops: General VK Singh 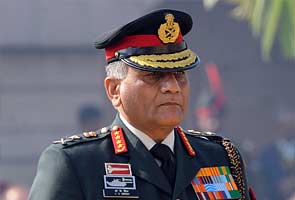 Amid a controversy over whether Pakistani army chief General Pervez Musharraf crossed the Line of Control in 1999 and spent a night on Indian-controlled territory, the former chief of the Indian army General VK Singh has said, "As a military commander, I commend General Musharraf  that he came 11 kms into enemy territory and spent the night with his troops. It is a testament to his internal courage... on the other hand, from our side, what was happening all of you know..Why did we let them in? There were some lapses on our part."

Col (retired) Ashfaq Hussain, who was a senior officer in the Pakistan Army's media arm , claims that in March 1999, ahead of the Kargil war, President Musharraf flew over the Line of Control in a helicopter and spent the night at a place called Zikria Mustaqar.

Colonel Hussain  first revealed this version of events in 2008 in  his book 'Witness to Blunder: Kargil Story Unfolds', and repeated it on a television talk show in Pakistan last night.

General VP Malik, who was the Indian army chief during the Kargil war, told NDTV: "The Indian Army had reports that the first Pakistani patrols had crossed over into Indian side of the LoC some time in February even as Prime Ministers Atal Bihari Vajpayee and Nawaz Sharif were discussing the peace process and Vajpayee had taken the bus ride to Lahore. Gen Musharraf, who had already planned the incursions into Kargil thought it fit to visit the forward areas immediately thereafter to assure the troops that the operation was going ahead as planned. It is therefore possible that Musharraf went there in March 1999 but whether he crossed the LoC or not, I cannot say."

Promoted
Listen to the latest songs, only on JioSaavn.com
In his book, Colonel Husain says the Kargil 'misadventure' was masterminded by Major General Javed Hassan, General Mehmood and General Aziz. They made then President Musharraf agree to the plans, which later lead to a limited conflict between India and Pakistan.

However, General Musharraf, in an interview to Pakistan's Geo TV, said the Kargil conflict was a huge success militarily. He claimed that the Pakistani Army would have "conquered" 300 square miles of India, if then prime minister Nawaz Sharif had not visited the US and succumbed to pressure from then US President Bill Clinton to withdraw Pakistani troops from Indian territory
Comments
General VK Singh