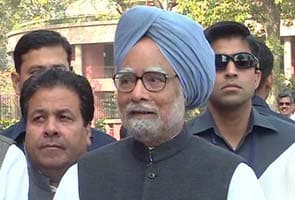 New Delhi: Prime Minister Manmohan Singh today said there is no need for Law Minister Ashwani Kumar to resign over a CBI affidavit submitted to the Supreme Court in the coal scam.

"There is no question of the Law Minister resigning. The matter is in court and sub-judice," Dr Singh said.

The CBI director, Ranjit Sinha, had yesterday admitted in his affidavit that Mr Kumar asked to see a copy of its report on the coal investigation before it was submitted to the Supreme Court, prompting the Opposition to say the minister had "lost the moral right" to remain in office.

For now, Mr Kumar has the backing of the Congress, which is waiting to see how the Supreme Court reacts to the CBI's affidavit next week. "I have done no wrong, the truth will prevail," he has said, refusing to step down.

The CBI director has not disclosed whether Mr Kumar asked him to make changes, or if he accommodated these requests. Mr Sinha's affidavit to the court says a draft of the report was also previewed by a senior bureaucrat in the Prime Minister's Office and the Coal Ministry.

Promoted
Listen to the latest songs, only on JioSaavn.com
At a meeting with the Prime Minister yesterday, Mr Kumar allegedly did not offer to resign and said it is his job, as the government's law officer, to provide legal inputs. "There's no case against the Coal Ministry or Law Ministry," he is reported to have said. Mr Kumar said that the government should decide its course of action after the next hearing in court on April 30, when the judges will react to the CBI's affidavit.

The opposition says the CBI's revelations prove that the government tried to impede the agency's autonomy and investigation, and that the Law Minister and Prime Minister are equally accountable and must quit.