The PM, who is on two-day Gujarat visit, and United Nations Secretary-General Antonio Guterres launched 'Mission LiFE', a global plan of action aimed at saving the planet from the disastrous consequences of climate change. 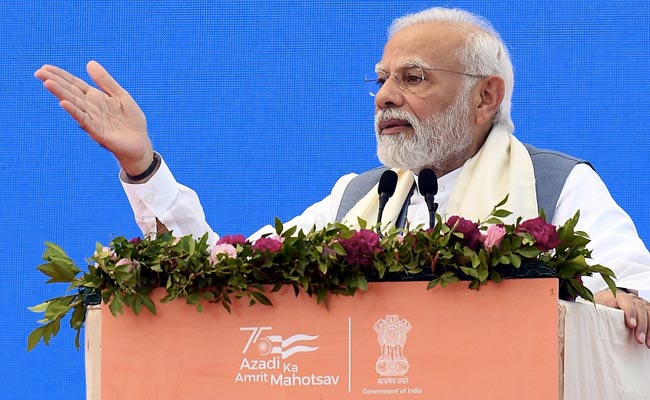 The PM said the mantra of Mission LiFE is 'Lifestyle For Environment'.

Prime Minister Narendra Modi on Thursday gave the mantra of 'reduce, reuse and recycle' for sustainable development and reaffirmed India's commitment to tackle the menace of climate change.

He said people are experiencing the ill-effects of climate change and maintained the issue goes beyond the realm of policy-making.

The PM, who is on two-day Gujarat visit, and United Nations Secretary-General Antonio Guterres launched 'Mission LiFE', a global plan of action aimed at saving the planet from the disastrous consequences of climate change.

The launch of the mission, aimed at encouraging people towards sustainable living, comes ahead of next month's mega UN climate meet in Egypt.

The action plan - a list of ideas on lifestyle changes that can be taken up as climate-friendly behaviour - along with the logo and tagline for Mission LiFE (Lifestyle for Environment) were jointly launched by Modi and Guterres at Kevadia in Gujarat.

Speaking on the occasion, PM Modi asked people to adopt the concept of 'reduce, reuse and recycle' and circular economy and said India is committed to tackling the menace of climate change.

Circular economy is a model of production and consumption, which involves sharing, leasing, reusing, repairing, refurbishing and recycling existing materials and products as long as possible. It entails markets that give incentives to reusing products, rather than scrapping them and then extracting new resources.

PM Modi said Mission LiFE will strengthen the concept of a pro-people planet and signifies "lifestyle of the planet, for the planet and by the planet".

This includes nudging individuals to practice simple yet effective environment-friendly actions in their daily lives (demand), enabling industries and markets to respond swiftly to the changing demand (supply), and to influence government and industrial policy to support both sustainable consumption and production (policy).

PM Modi said the prevailing notion that climate change is an issue only related to policy leaves this all important issue only to the government or international organisations.

"People are experiencing the effects of climate change in their surroundings, and in the last few decades unexpected calamities were witnessed. This makes it amply clear that climate change goes beyond just policy-making," he said.

The PM said the mantra of Mission LiFE is 'Lifestyle For Environment'. The mission will connect the people's power for the protection of the earth, and teach them to utilise its resources in a better way.

For example, a person goes to a gym on a vehicle that runs five kms on per litre (fuel). If the person goes there on a bicycle, then both the goals of protecting the environment and achieving personal fitness will be met, PM Modi said.

The PM also gave an example of the adoption of LED bulbs in India for reducing electricity bills and protecting the environment.

"This led to massive savings and environmental benefits and this is a recurring permanent benefit," he stated.

It unites people of the earth as pro-planet people, uniting them all in their thoughts. It functions on the basic principle of '"lifestyle of the planet, for the planet and by the planet," he said.

The annual per capita carbon footprint in India is only about 1.5 tonnes compared to the world average of four tonnes per year. Nevertheless, India is working at the forefront to solve global problems like climate change, he said.

"Today we are ranked fourth in wind energy and fifth in solar energy. India's renewable energy capacity has increased by about 290 per cent in the last seven-eight years. We have also achieved the target of achieving 40 per cent of the electric capacity from non-fossil-fuel sources nine years ahead of the deadline," the PM said.

"We have also achieved target of 10 per cent ethanol blending in petrol, and that too five months before the deadline," he added.

Through the National Hydrogen Mission, India has moved towards an environment-friendly energy source, PM Modi maintained.

"This will help India and many countries of the world to achieve their goal of net zero," PM Modi said.

Earlier in the day, the Prime Minister held a bilateral meeting with Guterres at Kevadia.

Officials said Modi had a long interaction with Guterres, who is on a three-day visit to India since Wednesday.