The Makkal Needhi Maiam chief said the police crackdown on protests would only "stoke the fire of Satyagraha" across the country. 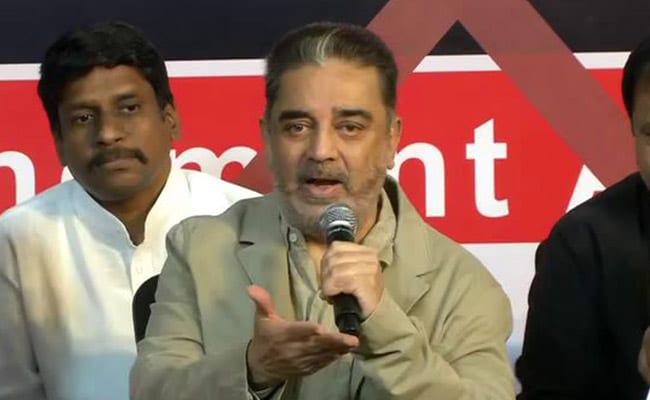 Kamal Haasan is a vocal critic of the Citizenship Amendment Act, which many term as "discriminatory".

The centre's attempts to curb protests against the Citizenship Amendment Act by detaining eminent personalities like Ramachandra Guha and Yogendra Yadav has only succeeded in "stoking the fire of Satyagraha", actor-politician Kamal Haasan said today.

"I applaud with glee at the stupidity of the government for stoking the fire of Satyagraha by arresting the thinking and questioning minds of India like Ramachandra Guha and Yogendra Yadav. Yet I am concerned for their safety. India stands with you," he tweeted on a day when spontaneous protests against the controversial law erupted in several parts of the country.

The Makkal Needhi Maiam (MNM) chief is a vocal critic of the Citizenship Amendment Act, which aims to make it easier for non-Muslim migrants to become Indian nationals. Many across the country have condemned the revised law as "communal" and "discriminatory" in nature.

In another tweet, the MNM chief asked the police to not disrupt the agitation taking place in the Tamil Nadu capital. "My request is to the Indian who is sitting on the Commissioner of Police Chennai's chair. Please do not stifle Democratic voices being raised at Valluvar Kottam today," he said.

Mr Guha was speaking to NDTV near Bengaluru's Town Hall when he was bodily dragged away by policemen at the scene. In one such video of the incident, a cop in riot gear could even be seen gesturing as if to punch the eminent historian.

"I have been detained by police for holding a poster of Gandhi and speaking about the constitution to the press," Ramachandra Guha told NDTV. "The police are working under directions from central government. We are protesting non-violently against a discriminatory act in a disciplined way."

Swaraj Abhiyan chief Yogendra Yadav was detained by the police near the Red Fort during ongoing protests in the national capital, a development that he described as an "honour". "It is an honour to be detained on the 19th of December, a small tribute to Ashfakulla Khan and Ramprasad Bismil. Happy to be in the company of Dr Dharamvir Gandhi, ex-MP, Patiala," he tweeted from the police van.