"If Any Decision..." Curious Phrasing Of Government Ad On NRC Amid Protests

The ads, taken out mainly in Hindi and Urdu newspapers said: "No nationwide NRC has been announced. If there is any such decision, rules and regulations will be formed in a way that no Indian citizen is impacted." 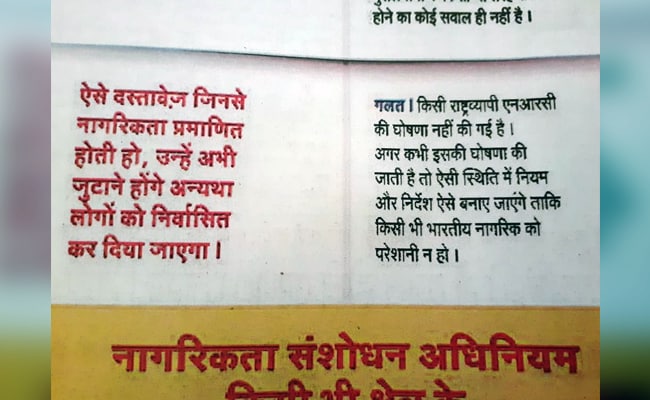 As protests against a new citizenship law and the National Register of Citizens (NRC) escalate, government ads in newspapers today said no nationwide NRC has been announced, and "if there is any such decision", the rules would be formed in a way that no Indian citizen is impacted.

The ads, taken out mainly in Hindi and Urdu newspapers said: "No nationwide NRC has been announced. If there is any such decision, rules and regulations will be formed in a way that no Indian citizen is impacted."

The wording and the use of "if" was interpreted by some as the early signs of a rollback on the citizenship drive that Home Minister Amit Shah had announced in Parliament, under the shadow of relentless protests.

"NRC will be carried out across the country. No one irrespective of their religion should be worried. It is just a process to get everyone under the NRC. NRC is a different process and the Citizenship Amendment Bill is different," Amit Shah had said in parliament last month.

Protests against the citizenship law and NRC have spread to various parts of the nation. Today, large gatherings were banned in cities like Delhi and Bengaluru. The police used batons and tear gas to disperse the protesters.

The NRC in the context of the Citizenship (Amendment) Act has raised concern that it may be used as an instrument to target Muslims. The citizenship law enables non-Muslims from Pakistan, Bangladesh and Afghanistan to become Indian citizens. Critics say the citizenship exercise NRC will drive out mostly Muslims as the others would have citizenship under the new law.

In Assam, the NRC released in August became controversial as 19 lakh people were left out of the new citizens' list with March 24, 1971, as the cut-off date based on the 1985 Assam Accord. The ruling BJP suffered resentment within when many excluded from the list turned out to be Hindus.

On the ads, poll strategist-turned-Janata Dal United leader Prashant Kishor, who has fiercely opposed the citizenship law as well as NRC, tweeted: "The argument that no nationwide #NRC has been ANNOUNCED is not convincing as it is not the SAME as clearly stating that there will be No #NRC."