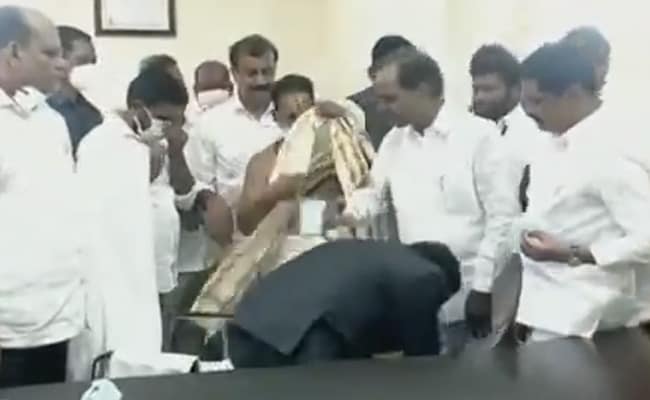 Siddipet Collector Venkatram Reddy later requested that not much be made out of his gesture.

A Telangana IAS officer's action of touching Chief Minister K Chandrashekhar Rao's feet at a function has come in for severe criticism, both from social media users and opposition leaders. Siddipet District Collector Venkatram Reddy sought to play down the incident, a video of which is doing the rounds on social media, citing the state's "culture" and "Father's Day".

The officer made his gesture yesterday when the Chief Minister inaugurated several government offices in Siddipet, including the Collector's. Following a traditional puja, Mr Reddy took his official seat and, shortly after, bowed down and touched Mr Rao's feet to take Mr Rao's blessings. He also paid his respects to Telangana Chief Secretary Somesh Kumar but didn't touch his feet and only bowed a little.

With the video of the act gaining currency on social media and following severe trolling, Mr Reddy issued a statement on Sunday night.

"It is part of Telangana's culture to take the blessings of elders during auspicious occasions. I took the blessings of the Chief Minister who is like a fatherly figure to me when I was taking charge in the new collectorate," he said in the statement.

Requesting not to "make an issue" out of it, Mr Reddy also said Father's Day was also being celebrated yesterday.

The Telangana opposition, however, was not amused.

"Antics like these are unbecoming of a senior administrative officer. They lower the dignity, integrity, and independence of IAS officers to execute their roles," said the state BJP spokesperson, suggesting that officials focus on their executive roles instead of turning into sycophants of political bosses.

Congress spokesperson Sravan Dasoju said the Siddipet Collector bowing before the Chief Minister was "obnoxious" and "unacceptable". The incident indicates there is only anarchy and dictatorial rule in Telangana, he said.