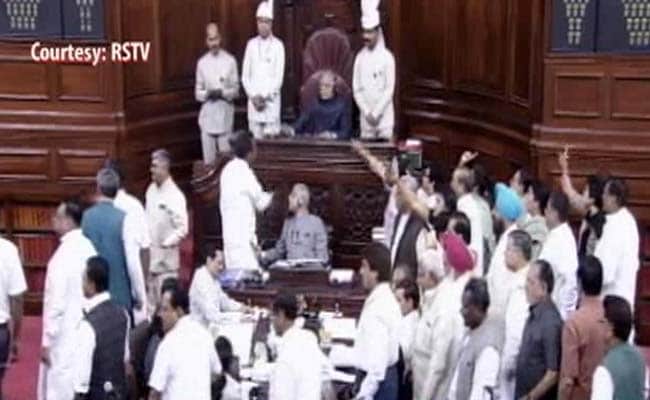 At one point, there appeared to be a possibility of an ugly showdown as some Congress members menacingly rushed towards the treasury benches, prompting a couple of marshalls to step in to act as a wall.

Congress members, who called Mr Swamy a "CIA agent", created bedlam, forcing repeated adjournments of the House in the pre-lunch session. However, Chairman Hamid Ansari prevailed on the agitating members to take up the Question Hour.

Mr Swamy, a BJP leader who took oath only yesterday as a new member nominated by the government, raked up the issue of AgustaWestland chopper case through his first Zero Hour intervention soon after the House met for the day.

He referred to the allegations reportedly made by Christian Micheal, the controversial middleman in the Rs. 3600 crore VVIP chopper deal, through a letter to the High Court of Italy.

Fearing an ugly showdown, a couple of marshalls stepped into the Well to act as a wall between the opposition and the ruling side.

Deputy Chairman PJ Kurien immediately adjourned the House for 10 minutes lest the situation went out of hand.

When the House re-assembled, Mr Kurien expunged Mr Swamy's reference to Mrs Gandhi saying he should not name a member who cannot come and defend himself or herself. Mrs Gandhi is a member of the Lok Sabha.

"I am not admonishing you as this is your first speech in the House. But the name is expunged," Mr Kurien told Mr Swamy.

This did not satisfy the Congress members who were in the Well again shouting slogans against Mr Swamy.

As Congress members continued to raise slogans from the Well, the Deputy Chairman again adjourned the House till noon.

When the House re-assembled, the Congress members were once again on their feet, chanting "CIA agent is sitting here" while pointing towards Mr Swamy.

Leader of Opposition Ghulam Nabi Azad said Mr Swamy will not be allowed to speak in the House unless he withdraws his comment. Deputy Leader of Congress in the House Anand Sharma also asked Mr Swamy angrily to withdraw his comments.

Minister of State for Parliamentary Affairs Mukhtar Abbas Naqvi said it was "not appropriate" for anybody to threaten a member of the House to which Congress member Hussain Dalwai retorted saying "nobody has threatened. He (Swamy) has only been called a CIA agent".

Amid the slogan-shouting by Congress members, Mr Ansari called for peace, insisting that questions should be taken up in the Question Hour after which, the Congress members withdrew to their seats.