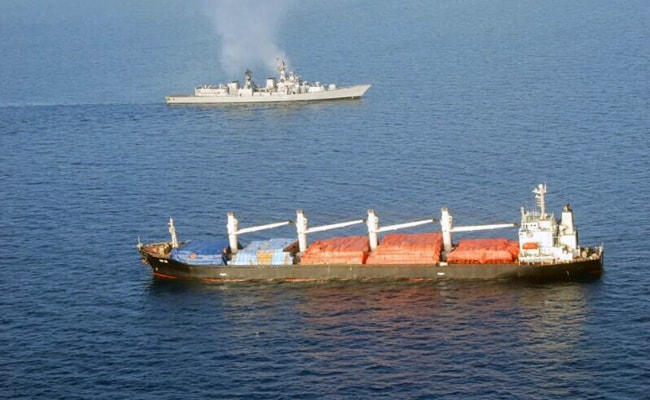 Beijing: China has edited out India's role in rescuing a cargo ship hijacked by Somali pirates in the Gulf of Aden, claiming full credit for delivering the ship to safety.

Yesterday, India's Defence Ministry said that the Indian and Chinese navies worked together in responding to a distress signal from the hijacked Tuvaluan ship early in the morning.

After receiving a distress call on Saturday night, the Indian warships established contact with the captain of the merchant vessel who had locked himself in a strong room along with the rest of the Filipino crew.

"An Indian Navy helicopter undertook aerial reconnaissance of the merchant vessel... to sanitise the upper decks of the merchant ship and ascertain the location of pirates, if still on board," a statement from the Defence Ministry said.

Emboldened by the helicopter cover and on receiving the all-clear signal that no pirates were visible on the upper decks, some crew members gradually emerged from the strong room. They searched the ship and confirmed that the pirates had fled overnight.

A boarding party from the nearby Chinese Navy ship then arrived on the merchant ship, while the Indian Naval helicopter provided air cover for the rescue operation. "It has been established that all 19 Filipino crew members are safe," the statement added.

The bulk carrier, OS 35, was travelling from Kelang in Malaysia to the port city of Aden in Yemen when it came under attack from Somali pirates on Saturday night.

The Indian warships were in the region as part of an overseas deployment. But a Chinese navy statement last night omitted any reference to the Indian Navy.

Chinese Foreign Ministry spokesperson Hua Chunying said the operation demonstrated "effectiveness of the Chinese naval force in the field of fighting against pirates."

When questioned about the Indian Navy's role being omitted, Ms Hua said China's Ministry of Defence should be approached for details.

Promoted
Listen to the latest songs, only on JioSaavn.com
"Under the cover of helicopters, special force members of the navy boarded the ship and rescued 19 (Filipino) crew members on broad. Both the ship and the crew members are safe now," she told reporters.

When asked about this, an Indian Navy Spokesperson in New Delhi referred to a photo he tweeted which showed an Indian helicopter flying over a Chinese navy vessel.

The reported coordination among the navies came amid sharp tension between the two countries over the Dalai Lama's visit to Arunachal Pradesh, slammed by Beijing as certain to "severely damage" ties. China holds the Dalai Lama, spiritual leader, as a "dangerous separatist" and claims part of Arunchal Pradesh as its territory, a move firmly rejected for decades by India.