The Lancet Countdown on Health and Climate Change is a comprehensive yearly analysis tracking progress across 41 key indicators. The annual project is a collaboration between 120 experts from 35 institutions, including the World Health Organisation and World Bank. 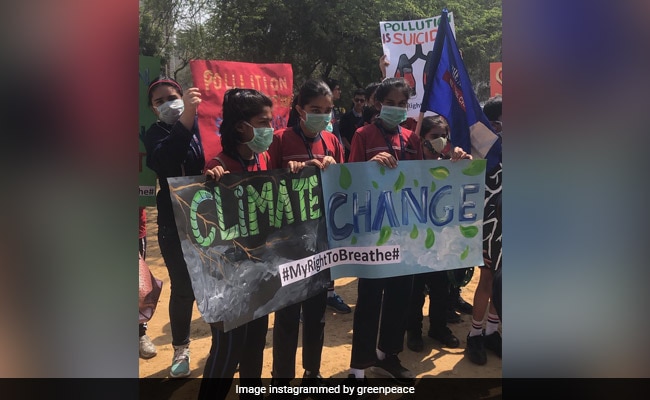 As temperatures rise in a changing climate scenario, children born in India will be particularly vulnerable to a greater health burden of malnutrition, air pollution and deadly heat waves, according to a major new report published in The Lancet journal.

The Lancet Countdown on Health and Climate Change is a comprehensive yearly analysis tracking progress across 41 key indicators. The annual project is a collaboration between 120 experts from 35 institutions, including the World Health Organisation and World Bank.

The authors noted that climate change is already damaging the health of the world's children, and is set to shape the well-being of an entire generation unless the world meets Paris Agreement targets to limit warming well below 2 degrees Celsius.

Poornima Prabhakaran, co-author of the report, noted that few countries are likely to suffer from the health effects of climate change as much as India, with its huge population and high rates of healthcare inequality, poverty, and malnutrition.

"While the report highlights the effects of climate change on people of all age groups, here what we are trying to do is to bring the focus back on children, because there is a sense of urgency about the issue," the professor at New Delhi's Public Health Foundation of India told news agency PTI.

"Every child who is born today, the future will be decided by the changing climate. Unless we take some serious action now, by the time they reach they reach their second, third or fourth decade of life, things will be very different because they will be living in a world that will be at least 4 degrees warmer," she said.

In India, she noted, diarrhoeal infections, a major cause of child mortality, will spread into new areas, whilst deadly heatwaves, similar to the one in 2015 that killed thousands of people in the country, could soon become the norm.

While the government has launched many initiatives and programmes to address a variety of diseases and risk factors over the past two decades, this report shows the public health gains achieved over the past 50 years could soon be reversed by the changing climate.

The energy landscape will have to change drastically, and soon, for the world to meet its UN climate goals and protect the health of the next generation, the report warns.

Nothing short of a 7.4 per cent year-on-year cut in fossil CO2 emissions from 2019 to 2050 will limit global warming to the ambitious goal of 1.5 degrees Celsius, it says.

"Children are specifically more vulnerable to the health risks of a changing climate. Their bodies and immune systems are still in a developing stage, leaving them more susceptible to disease, pollution and environmental pollutants," Ms Prabhakaran explained.

Nick Watts, executive director of The Lancet Countdown, added, "The damage done in early childhood is persistent and pervasive, with health consequences lasting for a lifetime."

"Without immediate action from all countries to cut greenhouse gas emissions, gains in wellbeing and life expectancy will be compromised, and climate change will come to define the health of an entire generation," Mr Watts said in a statement.

The report notes that harvests will shrink as temperatures rise, threatening food security and driving up food prices.

Infants and small children are among the worst affected by malnutrition and related health problems such as stunted growth, weak immune systems, and long-term developmental problems, say authors of the report.

Also, children will be particularly susceptible to infectious diseases such as dengue that rising temperatures and changing rainfall patterns will leave in their wake.

Nine of the 10 most "hospitable years" for dengue transmission have occurred since 2000. Around half of the world's population is now at risk.

The report also points out that through adolescence and into adulthood, young people are poised to suffer the most damage as their lungs are still developing, making them prone to worsening asthma, and an increasing risk of heart attacks and stroke.

Later in life, a child born today will face increased risk from severe floods, prolonged droughts, and wildfires. In 152 out of 196 countries, an increasing number of people have been exposed to wildfires since 2001-2004 with a financial toll per person 48 times larger than flooding.

India alone saw an increase of more than 21 million exposures, and China around 17 million, resulting in direct deaths and respiratory illness as well as loss of homes, according to the report.

Despite the scale of the challenge, the report offers some reason for cautious optimism -- growth in renewables accounted for 45 per cent of total growth in power generation in 2018, 27 per cent from wind and solar power.

"To dramatically reduce emissions by 2050, and to meet multiple Sustainable Development Goals, India must transition away from coal and towards renewable energy. It will also need to enhance public transport, increase use of cleaner fuels, and improve waste management and agricultural production practices, Ms Prabhakaran said.