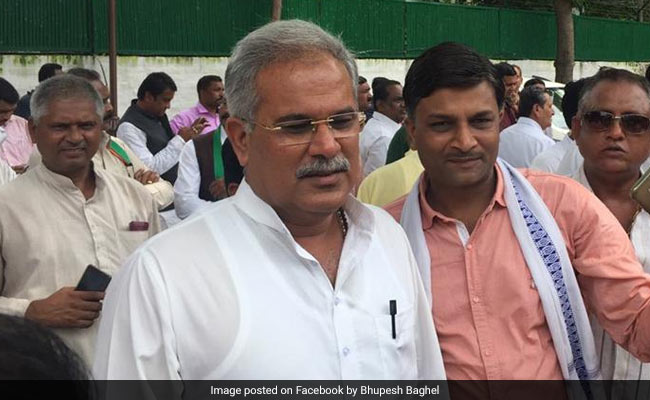 Bhupesh Baghel belongs to the influential Kurmi community that accounts for 14% of the state population.

Chhattisgarh Congress president Bhupesh Baghel, who led his party to victory in the state, will take oath as the new chief minister tomorrow. His colleagues Kamal Nath and Ashok Gehlot will also take charge of Madhya Pradesh and Rajasthan where the Congress dethroned the BJP the same day. Top opposition leaders are expected to attend the ceremonies in the state capitals.

In his first tweet since the announcement, Mr Baghel said Congress chief Rahul Gandhi has given him the responsibility of building "a new Chhattisgarh" and he can assure the people of Chhattisgarh that "the new Congress government would live up to their expectations and wishes".

"We wish him the best as he forms a government of equality, transparency and integrity starting off with farm loan waiver for farmers as we promised," the Congress had tweeted.

"I am committed to waiving farmers' loans within 10 days," responded the five-time lawmaker from Patan.

The 57-year-old, who belongs to the influential Kurmi (Other Backward Class) community that accounts for around 14 per cent of the state population of around 2.5 crore, is a popular leader with strong leadership qualities.

Mr Baghel took control of the Chhattisgarh unit of the party in October 2014, about a year-and-a-half after several senior Congress leaders, including VC Shukla and then party chief Nand Kumar Patel, were killed in a Maoist attack in Sukma. He was given the responsibility to revive the party following the third consecutive defeat in the 2013 Assembly elections.

The infighting within the Congress was at its peak around this time with a group, led by former Chief Minister Ajit Jogi, extremely critical of others in the party. Even Mr Baghel and Ajit Jogi apparently had differences.

In 2015-16, after an audio tape allegedly revealed that the Antagarh Assembly seat bypoll in 2014 was fixed, Ajit Jogi's son, Amit Jogi, was expelled from the party. Later, Ajit Jogi, who was accused of acting as a 'B team' of former Chief Minister Raman Singh, also quit the Congress.

When the party was struggling in rough waters, Mr Baghel, along with TS Singh Deo - who was among the top contenders for the chief minister's post -- mobilised and motivated Congress workers. In the recently held state polls, the Congress won 68 seats out of the 90, while BJP was left with only 15.

Born on August 23, 1961, in a farmer family in Durg district, he made his debut as a lawmaker from Patan in 1993 in undivided Madhya Pradesh. He won in 1998 and 2003 as well from the same constituency. He was the transport minister in Digvijay Singh government in 1999. After the formation of Chhattisgarh in 2000, he also served as the revenue minister in the Ajit Jogi government (2000-2003).

But in the 2008 Assembly polls, he was defeated by BJP's Vijay Baghel. A year later, he contested the 2009 Lok Sabha elections from Raipur and lost to BJP's Ramesh Bais.

Following successive defeats, both at personal and party level, it wasn't easy for Mr Baghel. But he tasted success in 2013, when he won from Patan, the seat that again voted for in 2018 assembly polls.

A few months ago, Mr Baghel was caught in controversy over a sex CD featuring a state minister. Arrested by the Central Bureau of Investigation for allegedly distributing the CD, he was refused bail. Mr Baghel has denied the allegation, saying it was politically motivated. He was attacked by the BJP troughout the election campaign over the CD row.

The state's Economic Offences Wing (EOW) had also registered a case against Mr Baghel and his family for alleged irregularities in a land-allotment case last year.