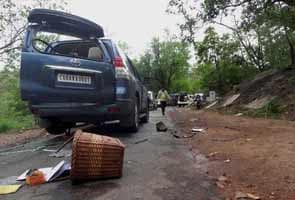 New Delhi: The brutal massacre in Chhattisgarh last week has prompted an internal exercise by the Home Ministry that is now seeking to tweak the Centre's policy to tackle the Maoist menace. Two senior Congress leaders were among the 24 killed in an ambush by the Maoists on Saturday last. Among them was Mahendra Karma, widely known as the founder of the controversial Salwa Judum, an anti-Naxal vigilante movement that was later banned by the Supreme Court.

Over the past 48 hours, a series of internal meetings have taken place in the Ministry of Home Affairs, deliberating upon the recent Maoist strike and its fallout. In those meeting, also attended by officials of the Naxal management division, the Central Reserve Police Force and the Intelligence Bureau (IB), ways to combat and counter the Maoists were also discussed.

Promoted
Listen to the latest songs, only on JioSaavn.com
The ministry, which is currently working on a new anti-Naxal strategy, is likely to present some of its proposals at the upcoming Chief Ministers' conference in New Delhi on June 5, some of which include:

A preliminary central government review had reportedly concluded that the lack of a comprehensive security plan and a neglect of safety procedures allowed the attack. Three specific intelligence inputs were also reportedly shared just before the attack that indicated the movement of Maoists in the area where the attack took place. But these key inputs, sources say, didn't translate into operations against the Maoists.