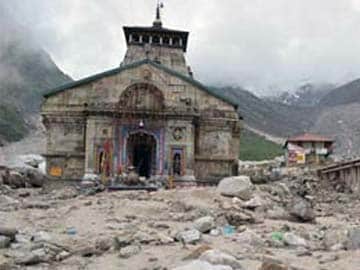 Dehradun: With the road to Badrinath thrown open by Uttarakhand authorities, the Chardham yatra partially resumed today after it was suspended a week ago due to heavy rains and landslips.

However, pilgrimage to Kedarnath remained stalled for the eighth consecutive day.

"We have opened the road to Badrinath for pilgrims this morning as blockage caused by landslips at Lambagad and Benakuli have been removed. However, we are not allowing heavy vehicles to go beyond Lambagad as of now. If the weather as well as the condition of roads improves in the next couple of days heavy vehicles too will be allowed to ply as usual," Chamoli District Magistrate S A Murugesan told PTI on phone.

However, a meeting will soon be held to assess the condition of roads and the weather and if we find everything fine then the yatra may be resumed from tomorrow.

Yatra to Kedarnath had initially been suspended for three days in view of a MeT department warning of heavy rains in the area which had witnessed an unprecedented calamity last year but the period of its suspension was extended later when the weather refused to improve and landslips brought mud and slush on to the roads leading to the shrine.

Yatra to the other two shrines of Gangotri and Yamunotri has also been resumed on a limited scale with 120 pilgrims paying obeisance at Yamunotri and 332 at Gangotri since yesterday, district officials said.

Road to the famous Sikh shrine Hemkund Sahib in Chamoli district has also been opened for pilgrims after nearly a week-long closure.

Sikh pilgrims who had been asked to wait in Govind ghat on way to the shrine till the road is cleared  have been asked to proceed, Chamoli DM S A Murugesan said.

60 pilgrims paid obeisance at Badrinath and 92 at Hemkund Sahib, he said.

Promoted
Listen to the latest songs, only on JioSaavn.com
"The weather is improving in Kadar valley also and road restoration work is underway on a war footing. This makes us hopeful that pilgrimage to the shrine may also be resumed soon," Rudraprayag DM Raghav Langar said.

Kedarnath and areas close to it had bore the brunt of last year's calamity with thousands of devotees killed at the shrine, nearby lodges and dharamshalas which had collapsed in the wake of a catastrophic deluge.