Chakma organisations submitted a memorandum addressed to Bangladesh PM Sheikh Hasina, demanding that those behind attack be brought to justice 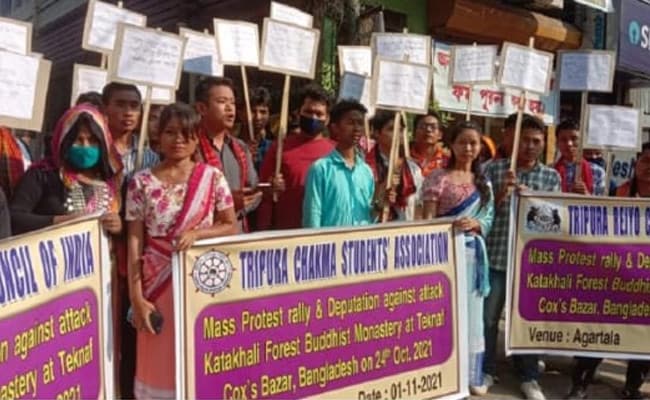 Six organisations protested outside the Bangladesh High Commission in Agartala

Six organisations of the Chakma community in Tripura staged a demonstration outside the Bangladesh High Commission In Agartala today to protest against an alleged attack on a Buddhist monastery in the neighbouring country.

On October 24, a mob allegedly set on fire the Katakhali Forest Buddhist Monastery in Cox's Bazar district of Bangladesh.

At least eight people from the Chakma community, including women, were injured in the attack.

The Chakma organisations submitted a memorandum addressed to Bangladesh Prime Minister Sheikh Hasina at the High Commission in Agartala.

The memorandum stated, "The attack on Katakhali Forest Buddhist Monastery that took place following a series of incidents of vandalism and arson of Hindu temples, Durga Puja pandals, and attacks on Hindu minorities from 13 October 2021 shows that the government of Bangladesh has not taken any measure to ensure protection of the religious minorities in the country."

"This is because the government of Bangladesh as on date has failed to punish those who destroyed 19 Buddhist temples and about 100 houses at Ramu, Cox's Bazar and Patiya of Chittagong in 2012," the memorandum stated.

The organisations "reminded" the Bangladesh government that it "has the responsibility of protecting the life, property and right of the religious minorities to practice their religion".

They demanded that the Bangladesh Prime Minister bring the perpetrators of the Buddhist monastery attack to justice and ensure prosecution of those who destroyed 19 Buddhist temples and about 100 homes at Ramu, Cox's Bazar and Patiya of Chittagong in 2012 through fast-track courts.