Ten central agencies have been equipped with powers of "interception, monitoring and decryption of any information generated, transmitted, received or stored in any computer"

The government's move to give investigating agencies sweeping powers to intercept and monitor data on computers will be examined by the Supreme Court. Allowing a batch of petitions against the Home Ministry's order that privacy activists claim is the same as "snooping", the Supreme Court today gave six weeks to the government to file its reply.

The petitions by lawyer Shreya Singhal, her co-petitioner and Trinamool Congress lawmaker Mahua Moitra, Supreme Court lawyer ML Sharma and others alleged that the government's order is against the fundamental right to privacy and must be cancelled in the interest of justice, which the court will examine now.

"The order by the Home Ministry violates privacy and we so wanted a stay on it. The court has issued notice to the Home Ministry... After six weeks the Supreme Court will look into our prayer on staying the notification," Ms Singhal told NDTV outside the top court in New Delhi. Shreya Singhal, then 24, was still studying law when she became the first person to challenge the now-scrapped Section 66(A) of the Information Technology Act in the Supreme Court.

Ten central agencies have been equipped with powers of "interception, monitoring and decryption of any information generated, transmitted, received or stored in any computer," in the order signed by Home Secretary Rajiv Gauba in December last year.

Earlier, only the home ministry could scan calls and emails of people. The new order gave that power to the Intelligence Bureau, Narcotics Control Bureau, Enforcement Directorate, Central Board of Direct Taxes, Directorate of Revenue Intelligence, CBI, National Investigation Agency, Cabinet Secretariat (Research and Analysis Wing), Directorate of Signal Intelligence (in Jammu and Kashmir, North-East and Assam only) and the Delhi Police Commissioner. 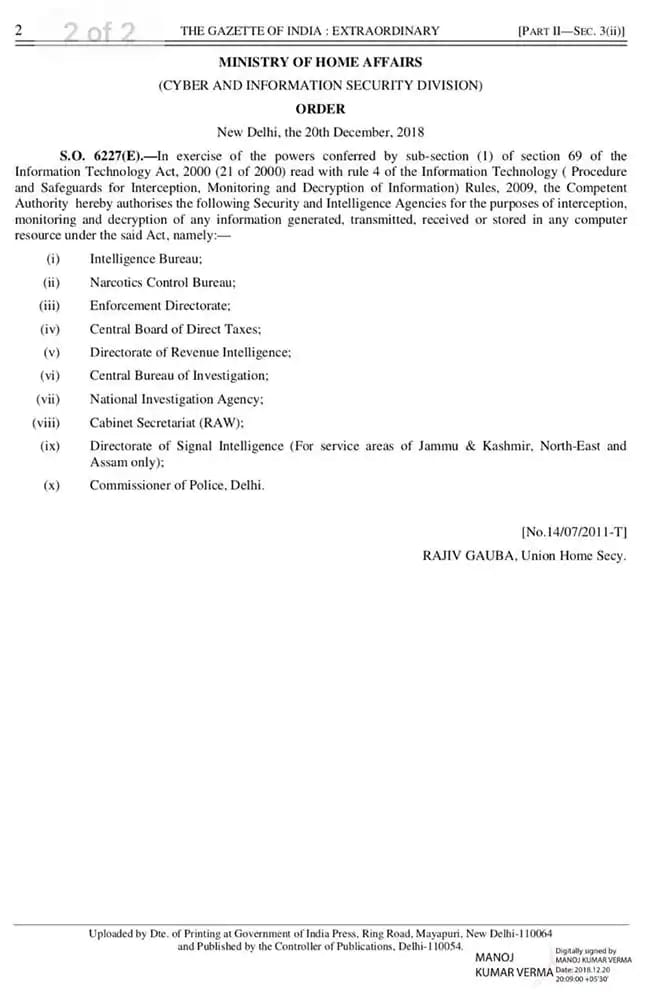 The home ministry has authorised the agencies to intercept information under 69 (1) of the Information Technology Act, 2000