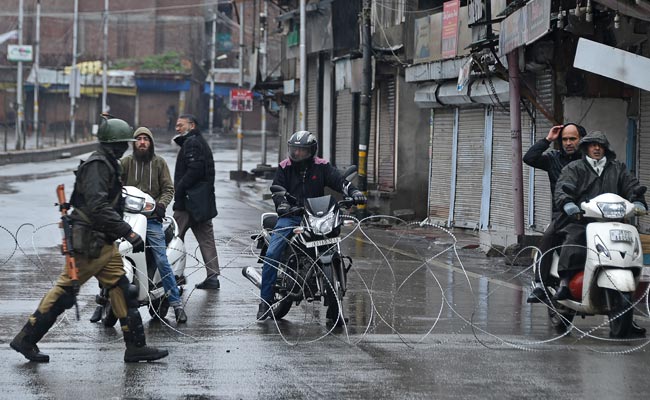 Terrorists and violent protesters in Jammu and Kashmir are being funded covertly, investigators say.

After banning the Yasin Malik-led Jammu Kashmir Liberation Front or JKLF in a major crackdown, the government is all set to block channels which fund secessionism and terrorism in valley. According to sources, the National Investigating Agency (NIA) has identified 13 people who either finance terror or advocate separatism in Jammu and Kashmir. Various government agencies now have initiated legal processes against them.

Top level government sources indicate that there is a direct connection between those who finance terror and advocate separatism in valley. "All-out effort is being made to seize and attach properties of all those promote and finance such activities in valley," a senior bureaucrat in the Ministry of Home Affairs told NDTV on the condition of anonymity. The Modi government has termed this move by agencies "a surgical strike against terror funding".

In a first such strike, action has been initiated to attach a plush bungalow of one Zahoor Ahmad Shah Watali in Gurugram, near Delhi. Watali is presently lodged in Tihar Jail.

"Watali is a major conduit for funnelling terror finances in India," explained a senior Enforcement Directorate officer, requesting not to be named.

He said that documents seized by them indicate that Watali has been receiving money from Pakistan-based terrorist bosses Hafiz Saeed and Syed Salahuddin, besides Pakistan's spy agency Inter-Services Intelligence (ISI) and the country's High Commission at New Delhi directly. He is known to have important sources of "hawala" financing operating out of Dubai also.

"He has floated various fake and shell companies from which money is transferred to various bogus and illegal bank accounts which are used to channelise the funds to Hurriyat leaders," a senior officer in the NIA claimed.

Apart from Watali, another 10 key players have also been brought into the dragnet of terror funding and multi-agency strikes have been launched against them in a concerted manner for the first time.

"Probe conducted by various agencies reveal that these identified  individuals have been providing money to all major terrorist groups like LeT (Lashkar-e-Taiba) and Hizbul Mujahideen as also Hurriyat leaders, separatists and stone-pelters in Jammu and Kashmir," the Enforcement Directorate officer added.

"Modi government is adopting zero-tolerance policy against terrorism and relentlessly curbing the activities of secessionist organisations which are threat to unity and integrity of the country. NIA and ED are taking strong action against these organisations," said Union Home Secretary Rajiv Gauba.

The Enforcement Directorate has zeroed in on proceeds of such crimes and has initiated efforts to freeze and seize assets of these individuals.

Sources in the agency claim that their investigation in the first phase has determined and quantified assets valued at over Rs 7 crore as proceeds of terror-funding crimes.

"Money obtained through these channels is also being used by major secessionist formations, particularly All Party Hurriyat Conference (APHC). These funds are used for maintaining top APHC leadership and also the massive propaganda machinery being used to arouse disaffection among the people of Jammu and Kashmir against the Government of India," a senior officer in the Home Ministry said.

The government also believes that this in turn is used to instigate and lure impressionable young men to resort to anti-India activities, violent street protests, demonstrations and stone-throwing on security forces at encounter sites for fomenting further violence.

"Extensive use of such funds is also being made to finance institutions focused on subverting the local population including through selected mosques, madrasas and organisation like recently banned Jamat-e-Islami (J&K). These then form a fertile pool of vulnerable young minds, which can be poisoned and exploited as gun fodder for violent activities aimed at destabilisation the state," a dossier prepared by the Home Ministry sent to Prime Minister Narendra Modi's office said.