Harsimrat Kaur Badal said that Shiromani Akali Dal has always stood against brutality, and that they would not stay quiet if the government does not scrap the farm laws 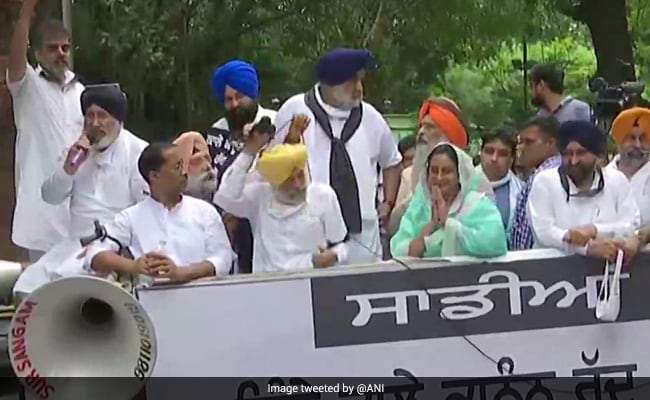 The government has brutally crushed all the promises they did to the farmers: Harsimrat Kaur Badal

Criticising the Central government for staying apathetic towards the farmers' issues for a year now, Shiromani Akali Dal (SAD) leader Harsimrat Kaur Badal on Friday said that the government had betrayed the farmers by bringing in ''black laws'' on September 17, 2020.

Addressing party workers outside Rakabganj gurdwara, Ms Badal was participating in the protest march organised by SAD to observe ''black day'' on the completion of one year of the enactment of three farm laws.

Mocking the government's slogan of ''Sabka Sath, Sabka Vikas, Sabka Vishwas'', Ms Badal said that with the introduction of these farm laws, the government has brutally crushed all the promises they did to the farmers.

"They promised to double the income of farmers by the year 2022 but introduced these black laws. Not only did they betray their ally parties, but also betrayed all the farmers of this country," she stated.

"Many people of Punjab shed their blood during the independence struggle. The farmers of Punjab gave food to the people of this nation when the country was begging for food grains from foreign countries," she added.

Adding that SAD has always stood against brutality, Ms Badal said that they would not stay quiet if the government does not scrap the farm laws. She, along with the SAD workers, raised slogans against the farm laws.

The SAD leader also condemned the government for not letting people inside the national capital.

"The farmers, even women, were stopped on the borders. Despite all these restrictions, there are so many of us here to protest against these black laws," she said.

SAD General Secretary Prem Singh Chandumajra on Thursday had informed that their party will hold a protest march from Gurudwara Rakabganj to Parliament in Delhi and will demand repealing of the three farm laws.

In the wake of the ongoing Covid-19 pandemic, Delhi Police issued a notice to SAD president Sukhbir Singh Badal and spokesperson Daljit Singh Cheema stating that the protest march will not be allowed in the national capital.

Despite the notice, the SAD president reached Rakabganj gurdwara and the police have tightened security as the SAD workers gathered in large numbers outside the gurdwara to protest against three farm laws.

Farmers have been protesting since November 26 last year against the three newly enacted farm laws: Farmers' Produce Trade and Commerce (Promotion and Facilitation) Act, 2020; the Farmers Empowerment and Protection) Agreement on Price Assurance and farm Services Act 2020 and the Essential Commodities (Amendment) Act, 2020.

Farmer leaders and the Centre have held several rounds of talks but the impasse remains.