The government imposed a communication blockade in Jammu and Kashmir last year as it revoked it's special status and divided it into two union territories. 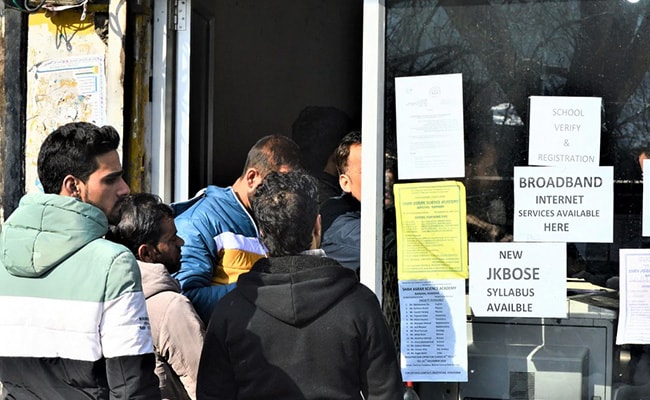 Internet speeds are currently capped to 2G in most of Kashmir. (File)

Internet restrictions in Jammu and Kashmir are in the interest of sovereignty and integrity of India, the central government told parliament on Sunday, adding that the throttled speeds are enough for digital education and public health services especially critical amid the coronavirus pandemic.

"The internet services are already available in Kashmir on fixed line and that too without any speed restrictions as well as 2G speed mobile data services are also operational since 24th January 2020. Restrictions on accessing social media sites have also been lifted from March onwards," Minister of State for Home GK Reddy informed Lok Sabha in a written reply.

"The 2G mobile internet speed is not an impediment in Covid control measures including dissemination of information to general public as well as health workers. E-learning apps and education and e-learning websites of the government are accessible over 2G internet for downloading e-books and other study material," he said.

He also added that high-speed 4G mobile data services have started in Ganderbal and Udhampur districts of the state where the government imposed a crippling communication blockade last year as it revoked Jammu and Kashmir's special status and divided it into two union territories.

Mobile internet services remain throttled in most of Jammu and Kashmir to very slow speeds to stop the spread of misinformation and terrorists from abusing the networks, the administration says. The restrictions have cost hundreds of thousands of jobs and crores in losses to the economy, critics say.

In another reply, the Home Minister also set said that even though no leader is under house arrest in Jammu and Kashmir, but 223 persons are under "preventive detention".

"At present there are no restrictions on movement but for security advisories to maintain the law and order situation and no person is under house arrest in JK for reasons not related to public health guidelines," Me Reddy said.

According to the government, there are no restrictions on movement of any individual including protectees of the Peoples Democratic Party or PDP.

"Considering the law and order and security situation of particular area, it is imperative that prior intimation is given by the protected persons regarding their movements," Mr Reddy informed Lok Sabha.