Cellphone In Hand, Punjab Woman Chases Armed Robbers Out Of Her Shop. Watch

This is not the first time a woman from Moga has made headlines by taking on potential robbers. 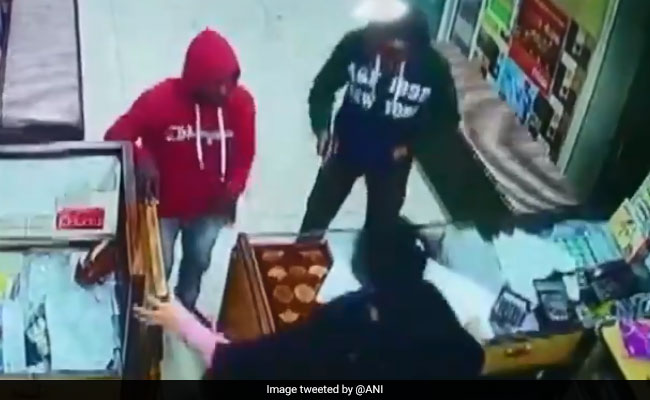 The woman prevented the hooded robbers from getting behind the counter.

Two aspiring robbers learnt this the hard way recently, when they tried to target a shop in Punjab's Moga city. CCTV footage of the incident accessed by news agency ANI shows the hooded duo approaching the woman - seated behind the counter - with a gun. The woman, however, appears curiously unperturbed even as they seemingly threaten her into handing out cash and valuables. It is only when one of the men tries to force his way behind the counter that she rushes up to them with something that looks like a smartphone in her hand.

The two appear confused, obviously not having expected a response of this kind. They rush for the exit but pause abruptly, as if wondering why they should be the ones scurrying away. Especially when they are the ones with all the firepower.

They turn back to face the woman again, this time without the swag, but she's ready with her smartphone for the battle to come. The warring parties spend a tense couple of minutes inching towards each other threateningly until the aspiring robbers finally run out of steam. They hurry out of the door, the woman in hot pursuit.

This is not the first time a woman from Moga has made headlines by taking on potential robbers. CCTV footage from two years ago showed a woman fighting off a man who attempted to snatch her bag after a chilli powder attack. The woman holds on until two passersby finally come and nab the robber.