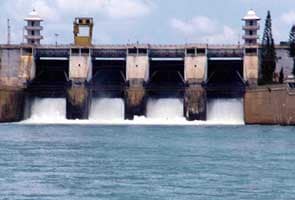 New Delhi: The crucial meeting of the Cauvery Monitoring Committee (CMC) will take place in New Delhi today to bring about a consensus between Karnataka and Tamil Nadu over sharing of the water of the Cauvery River.

The committee comprises of the officials from both the states, Kerala, Puducherry and Ministry of Water Resources.

Recently, a team of officials from the Water Resources Ministry had visited both Tamil Nadu and Karnataka to find out the conditions of crops. At today's meeting, the committee will analyse the reports collected from both the states. It will also review the water flows to Tamil Nadu after October 15 and submit its report to the Cauvery Regulatory Authority (CRA) headed by the Prime Minister.

Ahead of the meeting, Power Minister Veerappa Moily, who hails from the state, urged Prime Minister Manmohan Singh to provide immediate relief to the state.

"Depletion of water on the Karnataka side will further deteriorate the situation. It is but natural that farmers are very much agitated in view of the depleting water situation on account of the release (to Tamil Nadu)," Mr Moily said in a letter to Manmohan Singh on Wednesday.

Mr Moily urged the Prime Minister to review the September 19 ruling he gave as head of the CRA asking Karnataka to release 9,000 cusecs of Cauvery water to Tamil Nadu till October 15.

He is the second Central minister from Karnataka to formally write to the Prime Minister to review the September 19 order.

External Affairs Minister SM Krishna last week wrote to Mr Singh saying, "The entire state is waiting with bated breath to get immediate relief as otherwise it will spell disaster for the population in the Cauvery basin (on Karnataka side)."

M Karunanidhi, the chief of Tamil Nadu political party DMK, has written to the Prime Minister, asking for his intervention. With 18 Lok Sabha MPs, the DMK is the second-biggest member of the PM's coalition. Mr Karunanidhi has said that its flagrant violations of the water-sharing agreement mean that Article 356 should be invoked against Karnataka and it should be brought under Central rule.

The CMC meeting outcome would have a bearing on the stand that Karnataka would take on October 12 when the Supreme Court resumes hearing its petition to allow it stop water release.

It would also influence the decision the Prime Minister may take on Karnataka's appeal to him to stay his September 19 directive.

The Cauvery River originates in Karnataka and meanders its way over almost 800 km in Tamil Nadu; decades-old agreements mandate that its water has to be shared with Tamil Nadu. Karnataka has four dams on the river; Tamil Nadu has two.

The topography of the region means that Karnataka can control how much water is released downstream to Tamil Nadu.

Karnataka, which was releasing 9,000 cusecs daily to Tamil Nadu from September 29, stopped it late on Monday (October 8), prompting the neighbouring state to file contempt of court petition in the Supreme Court.

Karnataka Chief Minister Jagadish Shettar, however, is confident of the state convincing the top court that it has not committed any contempt.

He told reporters in Bangalore on Wednesday that the water release was stopped only after informing the Supreme Court on Monday that the state was in no position to continue it.

Karnataka has been arguing that is has been hit by worst drought in 40 years and water in the reservoirs across Cauvery was just enough to meet irrigation and drinking water purposes till next June when the four-month monsoon season starts.

Meanwhile protests in Bangalore and Cauvery basin district of Mandya, 80 km away, subsided. There was no road blockade which had become a daily affair in Mandya since September 30.