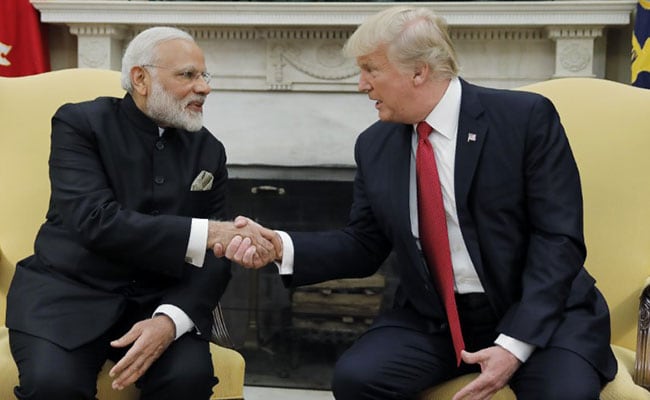 India should not lend itself to US to counter Beijing, said Chinese paper (AFP photo)

"Washington and New Delhi share anxieties about China's rise. In recent years, to ratchet up geopolitical pressure on China, the US has cozied up to India," said an article in China's state-run newspaper, the Global Times.

Underlining that India is not a US ally like Japan or Australia, it said, "To assume a role as an outpost country in the US' strategy to contain China is not in line with India's interests. It could even lead to catastrophic results."

The newspaper said that if India becomes a "pawn" for the US in countering China, new geopolitical friction will be triggered in South Asia.

After their meeting at the White House last night, PM Modi and Mr Trump, who bear-hugged, agreed that a close partnership between the United States and India is central to peace and stability in the region.

With an eye on China and its growing military ambitions in the Asia-Pacific area, both sides called for freedom of navigation and resolving of territorial and maritime disputes peacefully in accordance with international law, a reference to Beijing's aggression in the disputed waters of the South China Sea.

President Trump also endorsed India's objections to the new economic corridor that China is building through Pakistan-Occupied Kashmir as part of its gigantic initiative to unlock new land and sea routes to Central Asia. India says the China Pakistan Economic Corridor, being developed at a cost of at least $54 billion, violates its territorial sovereignty.

Thought President Trump has sought to curb China's regional clout, in part by questioning the "One China" policy employed by the US for decades, he has been courting China to persuade it to do more to rein in North Korea.
Comments
Indo-china relationsUS-India cooperationDonald Trump