Caste-based politics has to end in Karnataka: Deve Gowda 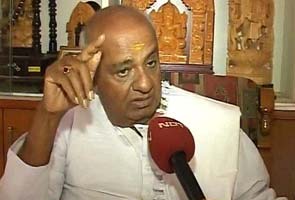 Bangalore: After managing to contain the rebellion in Karnataka - the only southern state it rules - the BJP is hoping that the transition from Sadananda Gowda to Jagadish Shettar as chief minister is a smooth one. The BJP's top leaders Arun Jaitley and Rajnath Singh are headed to Bangalore to oversee the transition.

For many months now, Mr Yeddyurappa had been flexing some serious political muscle in his bid to oust Mr Gowda and the party leadership finally gave in keeping in view the Assembly elections next year. The party will then need Mr Yeddyurappa, who as the most prominent leader of the powerful Lingayat community, had won Karnataka for the BJP in 2008; its first state in southern India.

But the chasm, triggered by the recent dissidence, has resulted in a loss of face for the party. And now, it is facing a lot of flak from political parties.

Former prime minister and Janata Dal (Secular) leader HD Deve Gowda has criticised both the Congress and the BJP, saying this caste-based politics has to end - and that the two dominant groups in the state should not be dictating terms.

"I haven't spoken to Sadananda Gowda for the past seven months... I have nothing to do with him... people levelled similar allegations when Dharam Singh was the chief minister," he said.

"People said Dharam Singh ran the administration on my diktat. If that was the case, then why did H D Kumaraswamy join hands with the BJP to form the coalition government?" the former prime minister, who hails from the Vokkaliga community to which Sadananda also belonged, said.

Promoted
Listen to the latest songs, only on JioSaavn.com
"The Congress used the same type of bogey to demolish Dharam Singh. One of A team, another is B team in Karnataka. This caste struggle is not created by us. This was created by themselves," Mr Deve Gowda told NDTV.