Candidates For Karnataka Bypolls After Verdict On Disqualified MLAs: BJP

"After the Supreme Court decision on disqualified MLAs, we will begin the process for selection of our candidates," Karnataka Chief Minister BS Yediyurappa said. 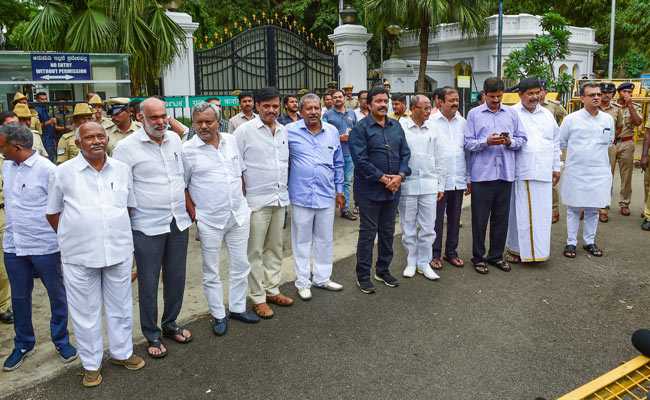 Bypolls to the seats represented by the disqualified MLAs will take place on December 5.

Karnataka Chief Minister BS Yediyurappa today said that the BJP will select its candidates for the December 5 bypolls in the state after the Supreme Court decides on the status of disqualified Congress-JDS MLAs.

"After the Supreme Court decision on disqualified MLAs, we will begin the process for selection of our candidates. Our campaign will begin by this month end."

Bypolls to 15 out of the 17 seats represented by disqualified MLAs, which the Election Commission had earlier decided to defer until the top court's decision, has now been scheduled for December 5.

Disqualified Congress-JDS MLAs would get BJP tickets for the bypolls if they wanted, Mr Yediyurappa had amid growing opposition within the party to any such move.

In a move seen as an attempt to pacify those who were against giving tickets to the disqualified MLAs, the Chief Minister had recently appointed eight former BJP candidates from constituencies represented by the disqualified legislators as heads to various boards and corporations.

Among the 15 constituencies going for polls, 12 were represented by Congress and three by JD(S).

The BJP has 105 MLAs--including one independent--in the assembly whose current strength is 208 (after 17 disqualifications).

While the Congress' strength is 66, JDS has 34 MLAs in the Assembly that also consists of one BSP member, a nominated member and the Speaker.

The actual strength of the assembly is 225 and the half way mark is 113.

The BJP needs to win at least six seats in the bypolls for 15 constituencies to remain in a majority in the assembly, which will still have two vacant seats.