Can Mamata and Mitra do magic in Bengal? 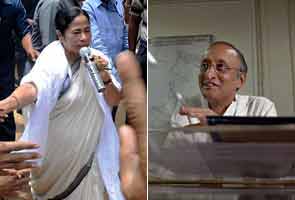 Kolkata: Amit Mitra was recently telling visitors why he had just left his cushy job as corporate India's top lobbyist to brave the tumultuous politics of his home state, West Bengal, by becoming its finance minister. A colleague barged into his office.

It was the public works minister, reminding Mr. Mitra that his department needed $32 million to cover bills that had gone unpaid since the state's previous government declared a spending freeze last December.

"I'll speak to the finance secretary," Mr. Mitra told his colleague, Subrata Buxi. "It will be done by 4 today."

If only Mr. Mitra, an economist trained at Duke University, could solve all of West Bengal's financial problems so easily.

Mr. Mitra, 63, whose party won a landslide victory last month against a communist coalition that had ruled the state for 34 years, is the point man for one of India's biggest domestic economic challenges.

West Bengal, with a population of 91 million, was once seen as an industrial model for the rest of the nation. Fifty years ago, the state had India's highest per-capita income, and its biggest city, Kolkata, formerly Calcutta, was the nation's de facto business capital.

But in recent decades, the city's and state's growth rates have lagged behind the rest of the country's.

The communist government's restrictive economic policies, authoritarian rule and penchant for strikes prompted many businesses to leave. The country's largest bank, the State Bank of India, moved its headquarters to Mumbai, the current financial capital. In a 2009 World Bank report, Kolkata ranked last among 18 Indian cities based on ease of doing business.

But in an election last month, voters replaced the ruling Communist Party of India (Marxist) and its allies with a young political party, the Trinamool Congress, that made reviving the state's economy a central plank of its platform.

"We are very hopeful," said Rana Sinha, chairman of the Kolkata-based eastern region of the trade group Confederation of Indian Industry.

But success will require more than replacing a communist government with favorable business talk. Mr. Mitra spent 18 years in New Delhi at the helm of the Federation of Indian Chambers of Commerce and Industry, the nation's premier business lobbying group. But his new boss, Mamata Banerjee, is a firebrand politician who has sometimes made the corporate community wary.

Ms. Banerjee, West Bengal's new chief minister -- the equivalent of an American governor -- built a large populist following by opposing controversial industrial projects that had been backed by the previous government. Critics say she was often an absentee manager of the national railways, which she oversaw the last two years as a federal minister, because she was focused on winning in West Bengal.

What is more, she and Mr. Mitra have inherited a state debt of 2 trillion rupees ($44 billion), among the highest in the country relative to the size of its economy.

The state's potential revival is not important just for its own sake. Most of India's poorest people live in a dozen northern and eastern states, including West Bengal. Economists and political analysts say that if India is to start approaching its potential, state governments must take the lead in providing their people with better financial opportunities and social services.

Now that Ms. Banerjee has been elected, her supporters promise that her full attention will be devoted to the state. Her campaign to overthrow the communists attracted support from across Bengali society, including former communists, police officers, writers and at least some business executives. One, Sabeer Bhatia, a founder of the American company Hotmail, volunteered to improve the party's communications department.

But perhaps the business person she will need to rely on most is her finance minister, Mr. Mitra.

Ms. Banerjee and Mr. Mitra lifted the state's spending freeze early this month by tapping into federal government money at their disposal. They also are negotiating an aid package from the national government, which is run by the Trinamool Party's ally, the Congress Party.

But to really fix the state's finances, economists say, the government must attract new investment and expand its tax base, which may prove difficult.

Many Indian business executives remember Ms. Banerjee for leading the charge against a manufacturing complex proposed by Tata Motors, India's largest automaker, in Singur, a village north of Kolkata. The company wanted to produce the Nano, a $2,500 car, at the plant. (She also opposed a proposed chemical complex at Nandigram, south of Kolkata.)

In Singur, Ms. Banerjee protested the government's decision to forcibly acquire land for the project, siding with 2,000 farmers who did not wish to give up 400 acres for the 1,000-acre site. At the time, Mr. Mitra, and most of India's business establishment, defended the project.

Tata abandoned the Singur site in 2008, moving the factory to Gujarat, a western state. Today, a couple of large empty buildings remain at the walled-off site as grim testament to that struggle. In 2008, Mr. Mitra said Tata's decision to leave would "create problems for the state."

Ms. Banerjee later recruited Mr. Mitra, who like her grew up in West Bengal, to lead a committee to help the railways work with private companies. It was during the year and a half he spent in this advisory role, Mr. Mitra said, that he came to appreciate Ms. Banerjee's position on Singur. He said the previous government "completely botched up" the project by seizing land from farmers without negotiating prices, a conclusion that even some communist leaders now acknowledge.

Mr. Mitra has changed in other ways, too. His attire, formerly tailored suits, is now more traditional. At a recent interview, he wore a Bengali dhoti kurta, a wrapped pantaloon-tunic combination.

At times, the rough and tumble of politics has seemed to wear Mr. Matri down. Near midnight on the day the new government was sworn in last month, he was taken to the hospital suffering from dehydration. He said he had not eaten in 16 hours.

But Mr. Mitra is no political parvenu. He comes from a well-known political family: his father was deputy speaker of the West Bengal legislature and his mother's uncle was the venerated freedom fighter Subhas Chandra Bose, who is remembered for having rejected Gandhi's nonviolent struggle and raising an army to fight the British.

Mr. Mitra said he joined Ms. Banerjee because it was a momentous opportunity to help turn around his home state. Using another version of Ms. Banerjee's name, he said, "If we do not join Mamata Bandopadhyay in this resurgence of Bengal, the historic change into the future, we would not be able to go to sleep comfortably."

Lapsing into a chamber of commerce cadence perfected in his previous job, Mr. Mitra said businesses were calling him almost daily to explore opportunities in the state. "Country after country, corporation after corporation, today are beginning to see that there is a great opportunity here."

Many businesses, however, are still on the fence. The Tata Group, India's largest business conglomerate, for instance, has not committed to running a factory on the undisputed 600 acres in Singur that Ms. Banerjee now says the company may have.

D. P. Nag, the secretary of the Bengal National Chamber of Commerce, said Ms. Banerjee might have been elected on a populist platform but must now deliver on economic development. "Now that they are in power," he said, "they have to do something."
Comments
Amit MitraWest BengalMamata BanerjeeSingurKolkatatrinamool congress