"Call Your Villages And Tell Them...": Arvind Kejriwal On Taking Oath

AAP's Arvind Kejriwal said at his oath ceremony: "Your son has taken the oath of Chief Minister for a third time. This is not my win, this is your victory" 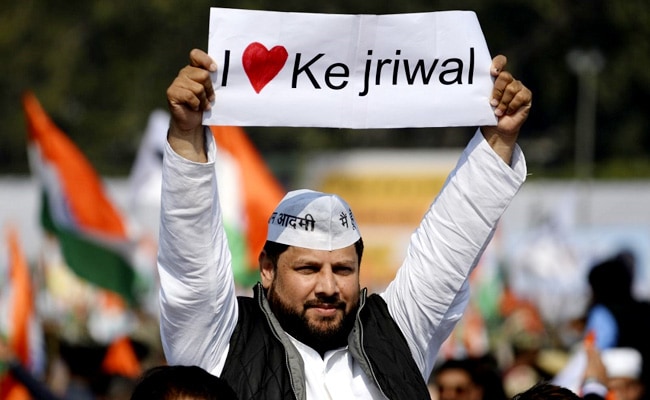 Ramlila Maidan: An AAP supporter at the oath ceremony of Arvind Kejriwal in New Delhi (AFP)

Arvind Kejriwal today thanked the people of Delhi for ensuring their "son" returns as Chief Minister of the national capital for a third time. After taking oath at the historic Ramlila Maidan today, Mr Kejriwal addressed thousands of people, who cheered for him as he started speaking.

"Your son has taken the oath of Chief Minister for a third time. This is not my win, this is your victory. This is the victory of every Delhi wala, every mother, every sister, every youth, every student, every family in Delhi," Mr Kejriwal said.

"In the last five years we have tried to work on how to ensure every family can become happier, give some relief in their lives, how to develop Delhi fast... In the next five years our effort on this will go on," he said.

"Everyone, call your villages and tell them 'our son has become Chief Minister, there is no need to worry'," the Chief Minister said, drawing applause from the crowd.

The Aam Aadmi Party won 62 seats in the Delhi assembly election - a near repeat of its 2015 tally of 67 seats at the end of one of the most polarising campaigns in the backdrop of the anti-CAA (Citizenship Amendment Act) protests.

The national capital has a large population of people from all walks of life who have come from outside the city. Mr Kejriwal's message today that they should "call home" to tell their "son" is the Chief Minister is being seen as his acknowledgement of their support.

"Some people voted AAP, some voted for BJP, some for Congress, but when I took oath as Chief Minister, I am the Chief Minister of everyone, of AAP, BJP, Congress and other parties. I have never been biased against anyone, have never said 'I won't help you because you voted for BJP'. I will work for everyone. In areas in the city where the BJP is strong, I have put water pipes, improved roads," Mr Kejriwal said.

In 2015 too, Mr Kejriwal's oath-taking ceremony took place at the Ramlila Maidan. It was held on February 14, coinciding with Valentine's Day. In 2013 after his party's first poll victory, the swearing-in ceremony was again held at the same venue.