US Man's Body Should Be Left Alone, As Should The Andaman Tribe: Experts

Conservationists have requested the authorities in the Andaman and Nicobar Islands to call off the search for the body of an American man, who was killed by the endangered Sentinelese tribe after he trespassed on their island last week.

Survival International, which seeks to protect the rights of tribal peoples, said Indian authorities should call off the operation which is "incredibly dangerous" for both sides. "The risk of a deadly epidemic of flu, measles or other outside disease is very real, and increases with every such contact," the group's director Stephen Corry said in a statement. "Mr Chau's body should be left alone, as should the Sentinelese."

Allen Chau, 26, was killed by arrows fired by the Sentinelese hunter-gatherers last week after he illegally went ashore in an apparent attempt to convert the tribe to Christianity. The tribe whose population is believed to be about 150 aggressively reject contact with the outside world.

A group of experts in India including anthropologist and researchers who have been studying the Sentinelese tribe have also expressed concern that search teams going to the island in south Andamans may escalate the tension.

"The media has reported nervous stand-offs between the teams seeking to land on North Sentinel to get the body and members of the Sentinelese community who clearly find these incursions unwelcome," the team of experts said in a statement.

"Continuing with the efforts could well lead to further violence and completely unwarranted loss of life," said the statement whose signatories include anthropologist and authors Pankaj Sekhsaria, Visvajit Pandya, Manish Chandi, Madhusree Mukherjee and Sita Venkateswar. 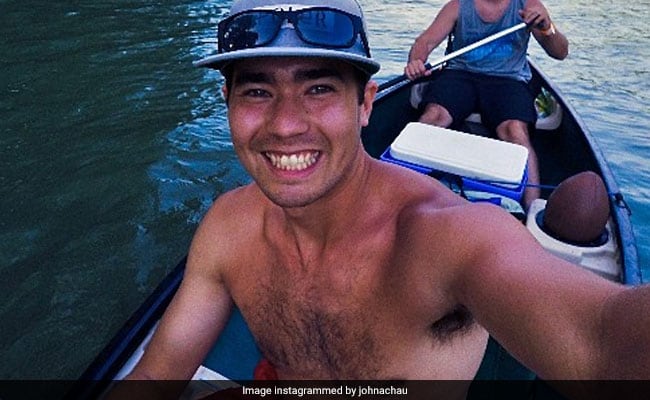 In a 13-page diary left behind by Allen Chau, he described how he managed to hoodwink the police, the Navy and the Coast Guard before reaching the island.

"The rights and the desires of the Sentinelese need to be respected and nothing is to be achieved by escalating the conflict and tension, and worse, to creating a situation where more harm is caused," they said.

The police said they will avoid any kind of confrontation with the Sentinelese and are taking the opinion of experts who understand the ways of the tribe. The police have used a helicopter and a ship to get close to the protected island but failed to spot Mr Chau's body or identify the place where he was killed.

"The law prohibits anybody from going there (North Sentinel Island). But a murder case has been filed and it must be investigated. We are not looking for a confrontation and don't want to give stress to the Sentinelese," Andamans senior police officer Dependra Pathak told NDTV.

Recovering the body could take days, if it happens at all, as authorities insist they cannot disturb the tribe or their habitat in the highly sensitive zone.

In a 13-page diary left behind by Mr Chau, he described how he managed to hoodwink the police, the Navy and the Coast Guard before reaching the island.