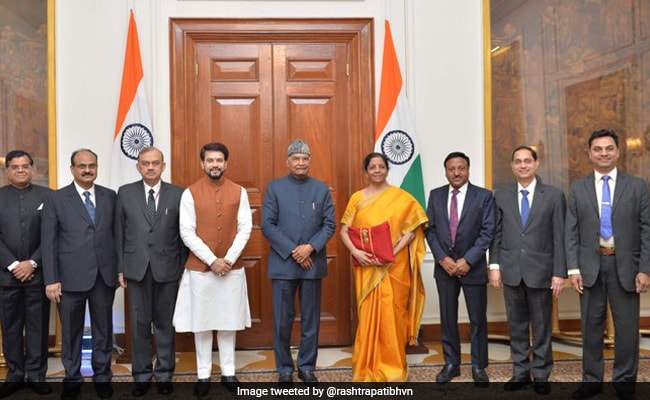 The Finance Minister was accompanied by her deputy Anurag Thakur and other officials of her ministry.

"As per tradition, Finance Minister @nsitharaman calls on President Kovind at Rashtrapati Bhavan before presenting the Union Budget," tweeted the President of India's handle, along with two photos from the meeting.

Like last year, Sitharaman opted for a traditional ''bahi-khata'' to carry budget documents. Dressed in a crisp yellow silk saree, the minister carried the documents wrapped in a red silk cloth, adorned with the Indian emblem in golden

The Union Budget 2020 will be presented in a short while from now. The Budget speech will begin at around 11 am today with Sitharaman beginning it with an address to the speaker of Lok Sabha. Usually, the duration of the presentation ranges from 90 to 120 minutes.

India's gross domestic product (GDP) is expected to rebound and grow at a rate of 6 to 6.5 per cent in the next financial year 2020-21, according to the Economic Survey laid in Parliament on Friday.

Weak global growth impacting the country and investment slowdown due to crisis in the domestic financial sector had led to the government to estimate GDP expansion at 5 per cent for the current financial year ending on March 31.