Will Support Congress In Madhya Pradesh To Keep BJP Out: Mayawati

Final election results 2018: BSP chief Mayawati said her party will support the Congress in Madhya Pradesh as it fought the election to keep BJP out

Mayawati today said her Bahujan Samaj Party (BSP) would support the Congress in Madhya Pradesh and Rajasthan, even though she did not agree with many of the party's policies, to keep the BJP out of power. Her support will take the Congress past the finishing line in both states, where it missed a majority in elections.

"Our aim is to keep the BJP out of power. And that is why we have decided to support the Congress in Madhya Pradesh," Mayawati said this morning. The BSP has won two seats in the 230-seat Madhya Pradesh assembly, in which the Congress has emerged the largest party but is two short of the majority mark of 116. The BJP is not far behind, with 109 seats.

"We have decided to support the Congress in Rajasthan as well. We fought these elections to ensure that the BJP does not come back to power," said Mayawati.

The Congress, which wrote to Governor Anandiben Patel late last night staking claim to power, is expected to meet her this morning.

While announcing her support, Mayawati did not spare the Congress her criticism. She said the Congress ruled most of the states in India but regional parties emerged because it was not working for the welfare of the people. "If the Congress had performed well, there would not have been a BJP either," she said. 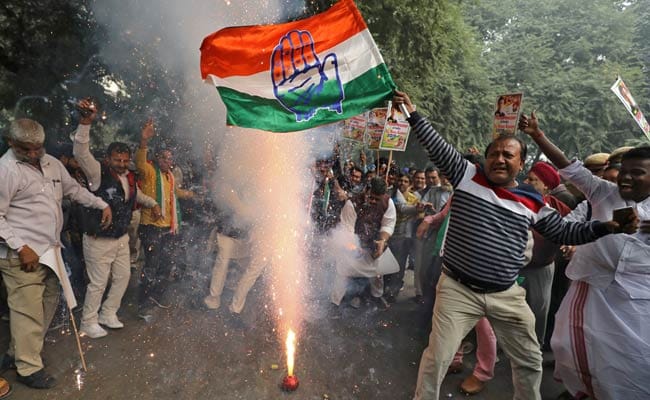 "Results show that people in states like Chhattisgarh, Rajasthan and Madhya Pradesh were totally against the BJP and its anti-people policies and as a result, they chose Congress due to lack of other major alternatives," the BSP leader told reporters.

The Congress' first overture to Mayawati went yesterday, as soon as it realized that its climb to the top of the heap in Madhya Pradesh in yesterday's vote count was slow and uncertain.

After receiving Kamal Nath's call, Mayawati called her leaders to Delhi for a meeting.

The BSP chief, a powerful Dalit leader from Uttar Pradesh with influence in swathes of rural north India, had snubbed the Congress during talks for seat-sharing in Madhya Pradesh and its neighbour Chhattisgarh. Acrimonious exchanges between Mayawati and the Congress at the time dampened hopes for a united opposition bloc to take on the BJP in next year's national election.

Mayawati had also skipped an opposition meeting held on Monday to establish unity goals for 2019. Her ally in the state, Samajwadi Party leader Akhilesh Yadav, had also given the meeting a miss.