The Border Security Force has recovered 30 sophisticated weapons and almost 8,000 assorted ammunitions in its biggest seizures of illegal weapons in the country's northeast region this year. 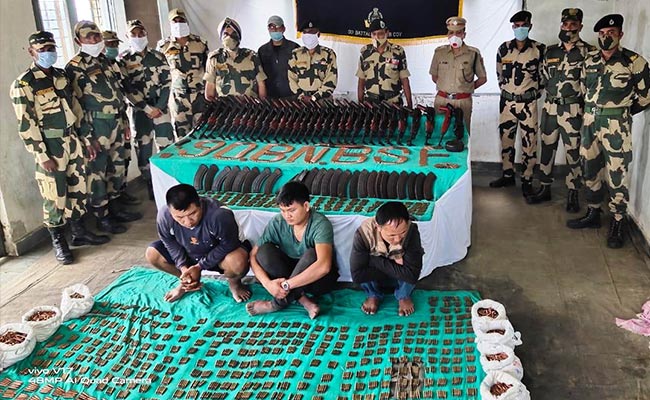 The Border Security Force, BSF, apprehended three persons from the Tripura-Mizoram international border with Bangladesh on Monday and seized a huge cache of illegal arms and ammunitions - one of the biggest caught this year in the North-Eastern region - from them.

It is suspected that the three men are part of an international arms smuggling racket, the BSF said in a statement released today.

The BSF made the seizure acting on a specific input from its Intelligence Branch about the transportation of a big haul of weapons to Mizoram's Phuldungsei area - 15 KM aerial distance from India's international border with Bangladesh.

Phuldungsei village, on the Tripura-Mizoram border, is the last village of Tripura.

Acting on the inputs, the border guarding organization launched a special operation on the outskirts of Phuldungsei. The BSF jawans laid a trap and intercepted two vehicles bearing Mizoram number plates.

"On searching the vehicles, the Border Security Force recovered 30 sophisticated weapons, including 28 AK-Series Rifles, one 5.56 MM AK-74 Rifle and one Carbine, along with 7,894 assorted ammunitions. An amount of Rs 39,020 and other articles were also recovered from the apprehended persons," the BSF said in a statement.

It is notable that last month, Tripura's former Chief Minister Manik Sarkar had warned the BJP-led state government about the rise in extremist activities in the state and said insurgents were trying to regroup. He had added that some former extremist leaders were trying to use Mizoram as a launch pad.