British Pilots To Make History, Fly Around The World In A WWII Spitfire

Pilots Steve Boultbee Brooks and Matt Jones will undertake the 43,452-km trip over a period of five months, stopping by as many as 100 locations along the way.

The two pilots had bought the Silver Spitfire from an auction nearly 10 years ago.

A little over two weeks from now, two British pilots -- Steve Boultbee Brooks and Matt Jones -- will embark on an epic mission straight out of a Jules Verne book in a fighter aircraft from the glory days of World War II. They will fly a newly restored Silver Spitfire 43,452 km around the world over a period of five months in the first attempt of its kind so far.

The project, named "Silver Spitfire - The Longest Flight", will begin with the fighter taking off from the Goodwood-based Boultbee Flight Academy in Sussex on August 5. Accompanied by a PC-12 support aeroplane, it will then fly over as many as 30 countries -- including Scotland, Canada, Japan, Russia, India and the United States -- before finally heading back to the United Kingdom in time for Christmas. The fighter will halt at as many as 100 locations along the way.

Incidentally, Mr Brooks is the co-founder of the Boultbee Flight Academy, where the Spitfire was restored. And for the 58-year-old pilot, his relationship with the fighter began the very day he and Mr Jones bought the two-seat fighter at an auction nearly 10 years ago. "It's a beautiful plane made of 80,000 rivets. We rebuilt the plane painstakingly piece by piece. The plane's taken two years and 15 people full-time, but it's now up and flying again," he told NDTV in an exclusive interview.

According to Mr Brooks, flying the World War II fighter with its 27-litre Rolls-Royce Merlin engine is nothing short of a glorious experience. "It's the largest petrol engine ever made, with a roar and depth that sounds like nothing else," he said. "It is one of the most iconic things that man ever created, and such a big part of all our history too." 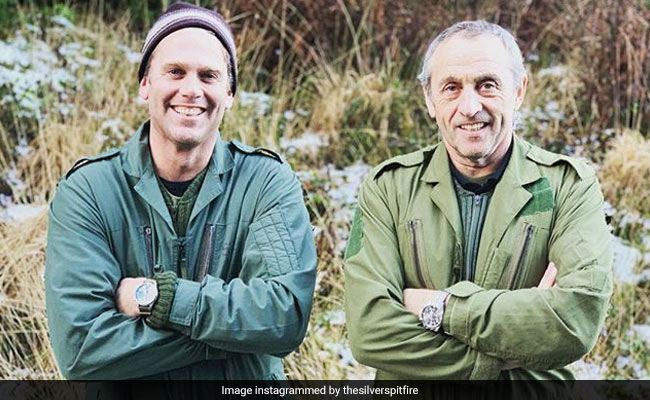 While this specific Spitfire was made for combat, flying as many as 51 missions during World War II, it serves a different purpose today. "We have taken away the military markings and the guns because that is not what we are about. We are about highlighting the perfect precision of this instrument," the pilot, who earlier made a record for flying from pole to pole in a helicopter, told NDTV.

This fighter was a part of India's air force in the fifties, and according to Mr Brooks, it means a lot for the country even today. "The Spitfire, somehow, stands for hope, freedom and everything that's wonderful about humanity. So, our goal is to come and visit you guys, visit people across the world who don't often get to see one of these things flying in real life. We really look forward to sharing this experience with you," he said.

"Silver Spitfire - The Longest Flight" is also intended to honour the pilots who lost their lives in the pursuit of freedom in World War II, Mr Jones said in a release. "The decision to fly the Silver Spitfire around the world was an instinctive one to honour the plane's history, the people who built, maintained and flew it through more than 50 missions... It's going to be exciting to bring the Spitfire back to many of the places it has served and to fly it for audiences who will see this beautiful and historic machine for the very first time," the 45-year-old pilot added.