He said he started losing the passion for continuing working for the party's interest as he was not given his due. 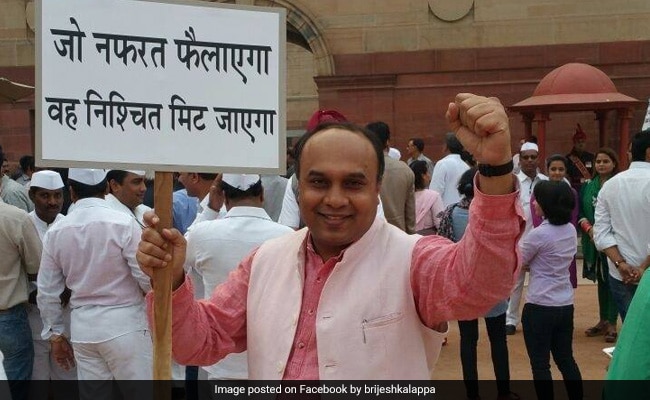 Brijesh Kalappa confirmed to NDTV that he will join Arvind Kejriwal led AAP.

The Congress party in Karnataka has suffered another setback with senior party worker Brijesh Kalappa resigning to switch over to the Aam Aadmi Party. Mr Kalappa, a Supreme Court advocate, joined the grand old party in 1997. While making the announcement in an emotional note addressed to Congress president Sonia Gandhi, he said he started losing the passion for continuing working for the party's interest as he was not given his due. He confirmed to NDTV that he will join Arvind Kejriwal led AAP.

Highlighting his contribution to the party, he wrote, "I have been representing the party on Hindi, English and Kannada channels since the UPA years in 2013 - for almost a decade and have clocked 6497 debates. Besides, the party has been regularly assigning political work to me which I have performed to the best of my satisfaction".

Stressing that he never felt lacking in energy and enthusiasm while representing the party, even after the 2014 and 2019 "debacles", he said he has lately been finding himself "lacking in passion", while his own performance has been "listless and perfunctory".

Mr Kalappa's 25-year-old association with the party came to an end soon after popular Kannada actor and former MLC Mukhyamantri Chandru resigned from the primary membership of the Congress after being denied a nomination to the Legislative Council.

Earlier on May 27, Mr Kalappa slammed BJP leader KS Eshwarappa's 'bring back Temples' comment. Amid the row over the Gyanvapi and the Shahi Eidgah mosques in Uttar Pradesh, Mr Eshwarappa had said that "all 36,000 temples will be brought back to the Hindus".

This news comes at a time when Congress has already been battling internal strife over its Rajya Sabha list. Yesterday, Maharashtra Congress leader Ashish Deshmukh announced his resignation from the post of General Secretary of the Maharashtra Pradesh Congress Committee alleging "imposition" of an outsider in the state.

Sources close to the G-23 or Group of 23 "dissenters" in the Congress have also raised many questions about the choice of candidates for the upper house of parliament. The party has chosen "outsiders" in Rajasthan and Chhattisgarh as well, the two states where it is in power.