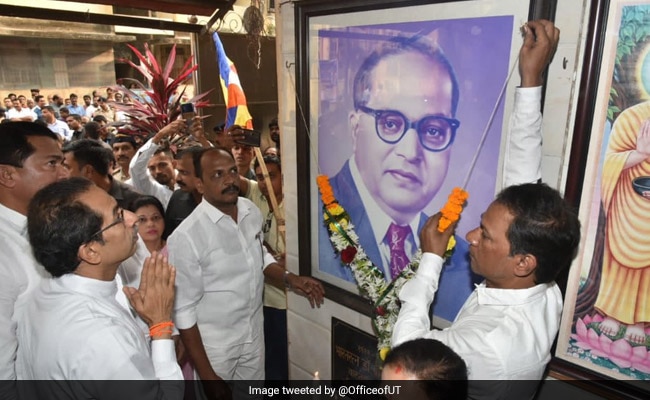 PM Modi said BR Ambedkar gave the country a "unique gift" in the form of the Constitution. Tributes to Babasaheb (as he was popularly called), who dedicated his life for social justice, on his Mahaparinirvana (usually referred to the ultimate state of nirvana).

"He gave unique gift to the country in the form of the Constitution, which is the cornerstone of our democracy. A grateful nation will always be indebted to him," the PM tweeted.

PM Modi also posted a video in which he describes the Constitution "a fine example of time management and productivity which encourages us to fulfil our duties in a record time".

"India first was the mool mantra (root idea) of BR Ambedkar," he said in the video.

Maharashtra Chief Minister Uddhav Thackeray on Friday paid floral tribute to the chief architect of the Constitution BR Ambedkar on his death anniversary at Chaityabhoomi in Mumbai.

He visited Chaityabhoomi, the site where BR Ambedkar was cremated after his death in 1956, this morning and paid floral tribute to the Dalit icon.

Chaityabhoomi, located in Dadar, Central Mumbai, attracts lakhs of BR  Ambedkar followers every year on his death anniversary, which is observed as Mahaparinirvan Diwas.

He said BR Ambedkar's upcoming memorial at Indu Mill, also in Dadar, will be an inspiration to win the fight against injustice and discrimination.

Many leaders also tweeted tributes for the Dalit icon.

"Homage to Dr Babasaheb Ambedkar, on his death anniversary. The Constitution is the guiding light of our democracy. We must do all we can to protect it. The words of the Constitution must inspire our actions," Bengal Chief Minister Mamata Banerjee tweeted.

The Vice President in a series of tweets said, humble tributes and respects to the architect of the Constitution.

"BR Ambedkar was a champion of democracy, he was a staunch patriot, a nationalist and a humanist to whom upliftment of poor and downtrodden was an essential precondition to development," Mr Naidu said.

Homage to Dr Babasaheb Ambedkar, on his death anniversary. The Constitution is the guiding light of our democracy. We must do all we can to protect it. The words of the Constitution must inspire our actions

Born on April 14, 1891, BR Ambedkar died on December 6, 1956. Fondly called Baba Saheb, BR Ambedkar campaigned against social discrimination against untouchables and also supported the rights of women and labourers. He was the force behind the Dalit Buddhist Movement in India. For this reason, he is revered as a Dalit icon.