The teen, from a well-known Delhi school, has identified 20 more boys who were active on the group. His mobile phone has been seized by the Cyber Cell of Delhi Police and is being investigated.

The boys casually talked about rape, sexual objectification and slut-shaming schoolgirls on the group.

A Delhi schoolboy has been taken into custody and more have been identified as the police investigate a horrific students' Instagram chat room that talked about gang-rape of schoolgirls. The group called "Bois Locker Room", which has caused huge outrage since it was exposed on Sunday, is deactivated now.

The teen, from a well-known Delhi school, has identified 20 more boys who were active on the group. His mobile phone has been seized by the Cyber Cell of Delhi Police.

Class 11 and 12 students of four or five schools in south Delhi are believed to be involved in the outrageous forum that is every parent's nightmare; the schoolboys casually talked about rape, sexual objectification and slut-shamed schoolgirls on the chatroom.

The cyber-crime division of the police has written to Facebook-owned Instagram for details on the group.

A number of conversations revolved around sexual assault often against their own classmates, in a frighteningly casual way, raising worries about the normalizing of rape, misogyny and objectification in schools.

"I will rape her easily," one of the posts read.

Some of the comments are being reproduced here to establish why the group chat has evinced reactions ranging from horror to outrage to concerns about the hyper-sexuality and violence that suffuses the comments. 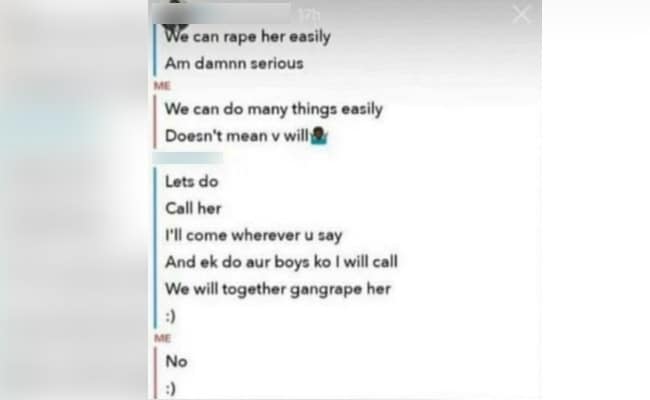 The screengrabs also showed students from some of Delhi's top schools posting photos of teenage girls without their consent along with comments too crude to be reproduced.

A 19-year-old college student filed a complaint when she discovered her images shared on the chatroom. Yesterday, the administration of one of the schools went to the police.

As the hashtag #BoysLockerRoom trended on social media, there were thousands of posts talking about another "Me Too" moment in India and the need to address toxic masculinity starting from schools.