Heavy rain in several parts of Kerala has triggered floods and landslides which have devastated the region over the past few days. 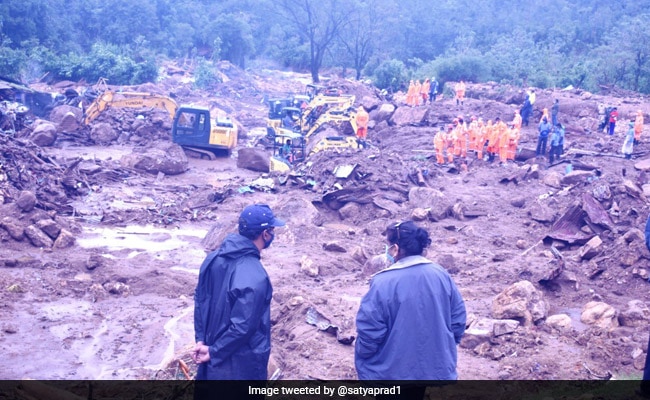 With a let up in the downpour, water receded in many low-lying areas of rain ravaged central Kerala on Monday, while the deaths in landslip hit Pettimudi in Idukki rose to 49 with 6 more bodies being recovered from the debris as rescue operations continued to trace those missing.

There was no red alert warning in any of the state's 14 districts as the intensity of rains decreased and the affected areas started limping back to normalcy, although hundreds of the flood-hit people are still housed in relief camps, particularly in Alappuzha, Kottayam, Pathanamthitta and Ernakulam districts.

Kerala State Disaster Management Authority (KSDMA) has warned about the possibilities of landslides in the hilly areas already hit by extremely heavy rainfall in the past few days and directed people living in the region and government authorities to be vigilant.

Actively carrying out rescue operations at Pettimudi near Rajamala in Idukki district where the settlements of estate workers were destroyed by devastating landslides four days ago, various agencies engaged in the rescue operations on Monday retrieved six more bodies, raising the deaths to 49 in the tragedy.

Personnel of NDRF, fire and police departments and volunteers of various organisations will continue their efforts to trace the missing people feared trapped in the debris, officials said.

The Idukki district collector had held discussions with the collector of Theni in neighbouring Tamil Nadu, with regard to the release of water through the tunnel to Vaigai dam when the water level touched the 136-feet mark.

The Kerala government had on Saturday asked the Tamil Nadu government to release water from Mullaperiyar to Vaigai Dam in a phased manner when the water level reached 136 feet in view of heavy rains in Idukki.

Six shutters of the Pamba dam, which were opened on Sunday evening after its water level rose near the permissible limit, were shut on Monday, reducing concerns of flood downstream.

Officials said there was a 30 to 40 cm rise in water level in Pamba but the river did not overflow its banks.

They said the shutters of the dams were closed after bringing down the water level in the dam to 982.8 metres.

Low-lying areas in Kottayam and Alappuzha districts of Kerala continued to experience a flood-like situation with water surging following downpour, although there was a respite from rains since the morning.

Crops in hundreds of hectares in Kuttanad "Below Sea Level Farming System", the only such one in India practising rice cultivation below sea level for the past two centuries, were destroyed due to the breach of bunds following heavy influx of rain water, farmers said.