Sonia Gandhi raised the issue during Zero Hour, condemning inclusion of the "blatantly misogynist" passage and demanding an apology from government 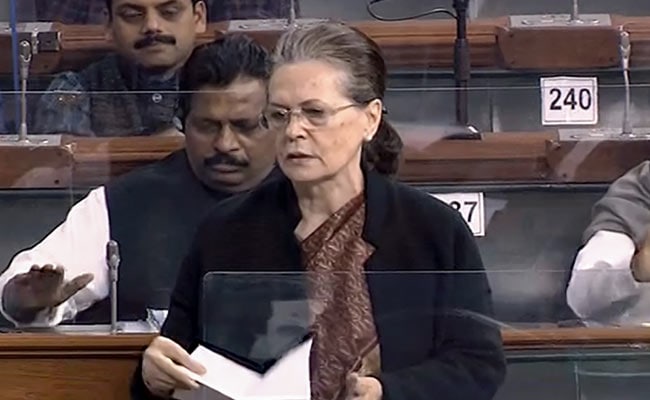 Congress president Sonia Gandhi today led the Opposition charge in Parliament over a passage in a question paper for Class 10 students of Central Board of Secondary Education (CBSE), which has drawn criticism for its misogynistic undertones.

Led by the Congress, members of the Dravida Munnetra Kazhagam (DMK), Indian Union Muslim League (IUML), Nationalist Congress Party (NCP) and the National Conference staged a walkout in Lok Sabha over the issue.

Mrs Gandhi raised the issue during the Zero Hour, condemning inclusion of the "blatantly misogynist" passage and demanding an apology from the Narendra Modi government.

"The entire passage is riddled with such condemnable ideas and the questions that follow are equally nonsensical. Sir, I add my voice to the concerns of students, parents, teachers and educationists, and I raise strong objection to such blatantly misogynist material finding its way into an important examination conducted by the CBSE. It reflects extremely poorly on the standards of education and testing, and it goes against all norms and principles of a progressive and empowered society," Mrs Gandhi said.

She said the objectionable question must be withdrawn immediately and a review must be ordered into what led to the "gravest lapse".

Congress leader Rahul Gandhi took to Twitter to target the government over the passage. Terming it "downright disgusting", he said such moves are "typical RSS-BJP ploys to crush the morale and future of the youth".

Most #CBSE papers so far were too difficult and the comprehension passage in the English paper was downright disgusting.

Typical RSS-BJP ploys to crush the morale and future of the youth.

At the centre of the row is a comprehension passage in the first-term English question paper with sentences like "emancipation of the wife destroyed the parent's authority over the children" and that "it was only by accepting her husband's way that a mother could gain obedience over the younger ones".

The passage also said that due to the "emancipation" of women, "there was more room now for disagreement between the parents, enabling the child to appeal from one to another, eventually ignoring both". "In bringing the man down from his pedestal, the wife and mother deprived herself, in fact, of the means of discipline," it added.

The CBSE issued a statement today, saying the passage is not in accordance with the guidelines. It said the matter was referred to a committee of subject experts and as per its recommendations, the passage and questions accompanying it have been dropped. Students will be awarded full marks for this passage, the board said.