BJP president JP Nadda termed the party's victory, polling for which was on Thursday, as historic. 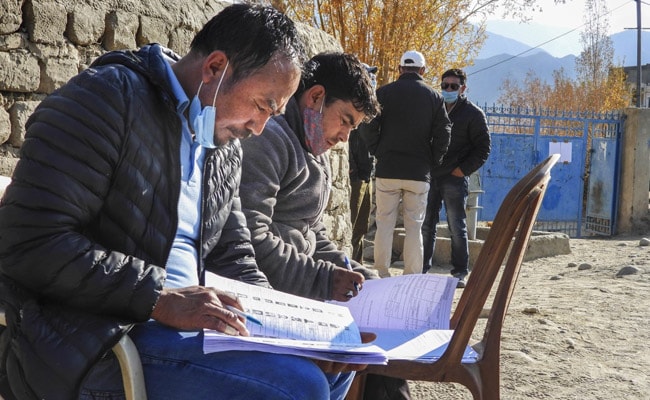 Retaining power, the Bharatiya Janata Party (BJP) has won the election to the 26-member Ladakh Autonomous Hill Development Council (LAHDC)-Leh by bagging 15 seats, while the Congress got nine seats.

Independents won two seats in the election, the first since Ladakh was made a Union Territory in August last year.

BJP president JP Nadda termed the party's victory, polling for which was on Thursday, as historic. "Gratitude to the people of Ladakh for their faith in BJP," he tweeted and congratulated party leaders and workers.

BJP's victory in Leh Autonomous Hill Development Council, Leh election is historic. BJP has won 15 out of 26 seats. I congratulate Shri @Jtnbjp and all karyakartas of @BJP4Ladakh unit.
Gratitude to the people of Ladakh for their faith in BJP.

The party had won 17 seats in the 2015 election. The Congress had won four, the National Conference had two seats and the Independents had three.

A turnout of 65.07 percent had been recorded in Thursday's election.

The Aam Aadmi Party, which had contested for the first time, failed to open its account. The National Conference and the PDP had stayed away.

"Out of 26 seats of whose results were declared today, BJP won 15 seats and Congress bagged nine seats. Two seats were won by Independents", an official said.

BJP candidates won from the last village of Turtuk on the Indo-Pak border but lost in the last hamlet of Chushul on the Sino-India border. The Independents bagged seats of Nyoma and Chushul.

Ninety-four candidates were in the fray and over 65 percent electorate had exercised their franchise.

In the election held in 2010, the Congress had 22 seats, while the BJP had four.

The counting of votes for the sixth LAHDC elections was organized at the Amphitheatre of SSK, Tisuru, Leh. Adhering to the COVID-19 guidelines, all standard safety measures like wearing masks, using sanitizers and following social distancing were sincerely followed at every counting booth.

An electorate of 89,776, including 45,025 women, were eligible to exercise their franchise in 294 polling stations spread over 26 constituencies across Leh.

The LAHDC-Leh has a total of 30 seats, with four of the councilors nominated by the government.

Since the formation of the hill council in 1995, the Congress had swept the polls thrice, while the Ladakh Union Territorial Front had won the elections in 2005. The BJP wrested control of the council from Congress for the first time in the last election. Kargil district of Ladakh had a separate hill council, which was elected in 2018 for a five-year term.