Rahul Gandhi also hit out at Prime Minister Narendra Modi alleging that the latter visited the state only during election time. 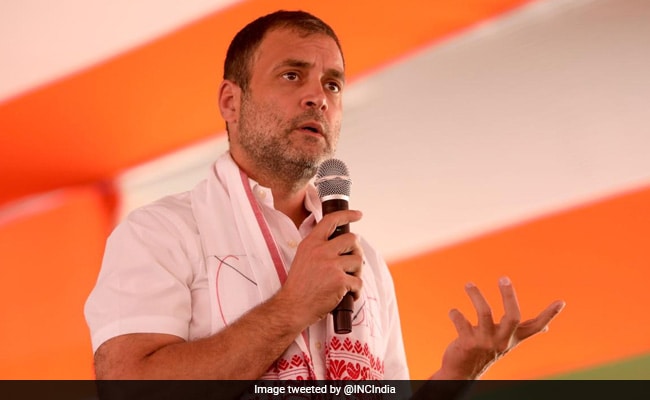 BJP wants outsiders to come and take what is yours as they took your airport: Rahul Gandhi in Assam

Congress leader Rahul Gandhi on Friday alleged that the Bharatiya Janata Party (BJP) wants to govern Assam from Nagpur while allowing outsiders to take over the state whereas, the Congress would work as per the wishes of the locals.

Addressing a public meeting in the Tinsukia district ahead of the Assembly election in Assam, Rahul Gandhi said, "BJP wants to run Assam from Nagpur (Rashtriya Swayamsevak Sangh's Headquarters). They want outsiders to come and (take over) take what is yours as they took your airport. We want to run Assam from Assam only. Our Chief Minister will work after listening to the people of Assam and would have nothing to do with Nagpur."

The Congress leader, who arrived in the state on a two-day campaign began with interaction with students at a college in Lahowal in Dibrugarh and interacted with tea garden workers at Dinjoy tea estate in Dibrugarh.

During his interaction with students in Dibrugarh earlier, the Wayanad MP also hit out at Prime Minister Narendra Modi alleging that the latter visited the state only during election time.

"During the floods, you (the voter) cannot give him anything so he does not come but during elections, you can give him votes, so he comes," Mr Gandhi said.

Further, he attacked the BJP at the Centre for rising "unemployment amongst youth, the declining democracy, and the farm law protest.

Mr Gandhi said, "Democracy is declining. Youth are unemployed, farmers are protesting, CAA is there. We can't ask the people of Assam to forget their culture, language if they come to Delhi. People from different cultures, languages, religions make up India. One force, born in Nagpur, trying to control the whole country. If the country's future (students) cannot openly talk to the Prime Minister, then there is no doubt that something somewhere is wrong."

The Congress would be contesting the Assembly polls in alliance with the minority-based All India United Democratic Front and four other parties.

Assembly elections in Assam for 126 seats will be held in three phases starting on March 27. The counting of votes will take place on May 2.