Mamata Banerjee said the BJP brings up the Citizenship Amendment Act to win votes in elections. 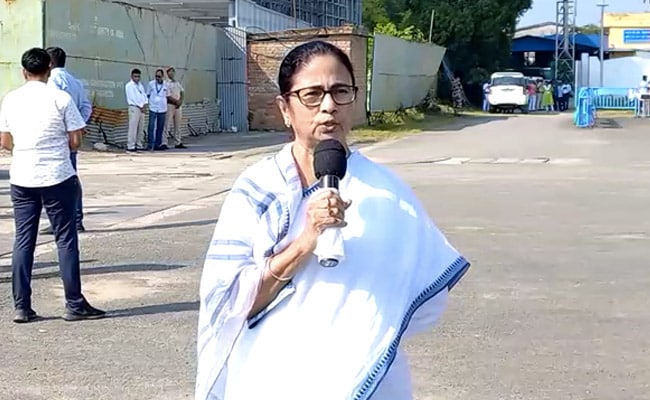 Mamata Banerjee said the Matua community already had all benefits.

West Bengal Chief Minister Mamata Banerjee on Wednesday took on the union government over its recent overtures to the politically influential Matua community in the state over the implementation of the contentious Citizenship Amendment Act or CAA.

"They rake up CAA only during elections. They want to create confusion over CAA amongst you. And when polls are near, the idea of NRC (National Register of Citizens) enters their head," she said, referring to the law that the BJP has claimed will benefit the Hindu community that migrated to West Bengal from present-day Bangladesh after the partition and the formation of Bangladesh in 1971.

Cleared in 2020 in the face of fervent protests from Muslims, opposition parties, civil society groups and the parts of the northeast, the CAA promises citizenship rights to people who came to India from neighbouring countries before 2015, as long as they are not Muslims.

While the law has faced strong criticism from groups who fear they will be disenfranchised and declared illegal immigrants, the Matua community in Bengal has been promised greater legitimacy once the law is implemented. The delay in the implementation has frustrated some of them.

The Chief Minister was speaking at a public meeting at Krishnanagar in Nadia district with the local MP Mahua Moitra, whom she has publicly pulled up in the past, by her side, signalling a possible rapprochement.

Reiterating her opposition to the controversial law, she said, "Gujarat elections have been declared, and now they say they want to implement CAA in Bengal. How will you do it? We will not allow you to do it."

"What does CAA mean? Citizenship? I want my Matua brothers and sisters to tell me... if you were not citizens, how would you get all the benefits? These are lies. The BJP wants to bring some people from other places. They are not people of Bengal at all. To ensure the entry of those people, by giving them citizenship, they will diminish your citizenship?" Ms Banerjee said.

"You vote and elect MLAs and MPs and Panchayats and municipalities. It is your vote that had led to Narendra Modi's victory, and he has become PM. They have got all the votes from Ranaghat. How did he become PM if you did not have the right to vote?" she asked.

"Those who have elected me, if you did not have the right to vote, how did you elect me? These things are their lies. I want to tell my Matua brothers, you are citizens. I won't let them hurt you a bit. I will give my life but not let them take away your citizenship," Ms Banerjee added.