BJP Slams Rahul Gandhi Over Income Rise Between 2004 And 2014 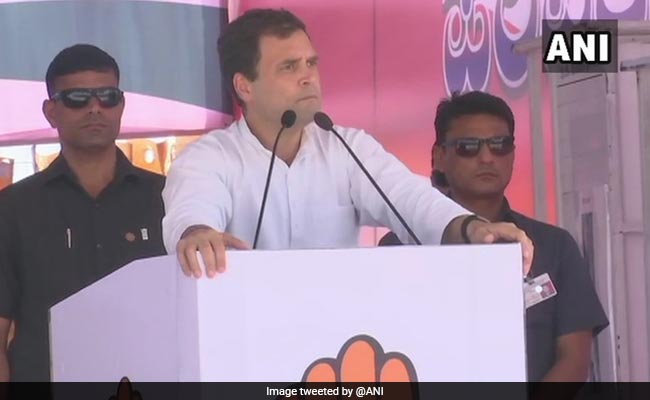 There was no response from the Congress. (FILE PHOTO)

The BJP on Saturday cited the rise in Congress president Rahul Gandhi's income between 2004 and 2014 to question its source, claiming he had no ostensible source of income.

There was no response from the Congress.

BJP leader and Union minister Ravi Shankar Prasad told the media that Mr Gandhi's income had risen from over Rs 55 lakh in 2004 to Rs 9 crore in 2014 as per his election affidavits, and asked how can an MP witness such a jump in income.

Referring to Mr Gandhi's brother-in-law Robert Vadra, Mr Prasad said, "Till now, we had seen the Vadra model of development under which you invest Rs 6-7 lakh and earn Rs 700-800 crore in two-three years. Now we have come across the Rahul Gandhi model of development."

The senior BJP leader also claimed that Mr Gandhi and his sister had a 4.69-acre farmhouse in Delhi that was rented out to a firm, Financial Technologies (India) Limited, that had been issued show-cause notice for violations pertaining to National Spot Exchange promoted by it.

He also questioned Mr Gandhi whether he had bought two properties of Rs 1.44 crore and Rs 5.36 crore from Unitech which was linked to the 2G spectrum allocation scam.

"The maximum trial in the case happened before we came to power. I had said the 2G judgement was legally unsound and morally improper. One judge had commented, 'I had been waiting for evidence for seven-eight years'. Is the wait for evidence and the property purchase linked? The matter is under appeal and we have asked for expeditious hearing," he alleged.

(Except for the headline, this story has not been edited by NDTV staff and is published from a syndicated feed.)
Comments
Rahul GandhiRavi Shankar Prasad