Omar Abdullah is one of several Kashmiri politicians who have been detained or placed under house arrest without any charge since last August. 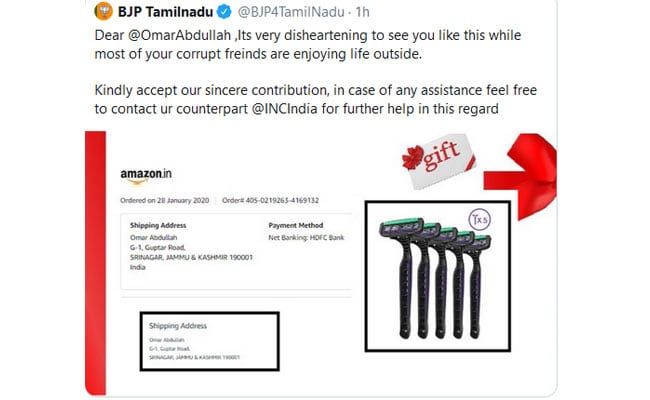 Notwithstanding a complete ban on social media in Jammu and Kashmir, the BJP on Tuesday took a dig at former Chief Minister Omar Abdullah, who has been under house arrest for nearly six months, over his appearance in a viral photograph.

Responding to an image of Mr Abdullah in an uncharacteristically long beard, the BJP's Tamil Nadu unit tweeted a screenshot of a gift receipt for the National Conference leader. The order? A five-pack set of disposable razors.

The tweet has since been deleted but not before it racked up several comments, describing the taunt as distasteful.

If New President of the BJP, who hails from our neighbouring state Himachal Pradesh, Right Hon'ble MP @JPNadda has even an iota of sensitivity and propriety-which I am sure he does, then he should sack the authors of this thoroughly distasteful Tweet. @BJP4India@BJP4TamilNaduhttps://t.co/vF9ZE8hlVT

How insensitive & hateful can someone be!!! Appalled that this is the level of discourse the biggest national political party of our country is propagating! Shameful, to say the least! #Kashmirhttps://t.co/vtY1eY17ES

Jammu and Kashmir has been under severe restrictions - which until recently included the world's longest internet ban - since the central government scrapped its special status and turned into a centrally-governed union territory in August last year.

These have included the banning of all political activity, the deployment of large numbers of soldiers and the blocking of mobile and internet services (which were restored with several curbs last week), something the Supreme Court said violated part of the fundamental right to freedom of speech.

Omar Abdullah is one of several Kashmiri politicians - which also includes former Chief Ministers Farooq Abdullah and Mehbooba Mufti - who have been detained or placed under house arrest without any charge since then.

An image of Omar Abdullah with a beard was widely shared on social media last week.

Omar Abdullah, 49, is under "precautionary" confinement at Hari Niwas in Srinagar, while his 83-year-old father Farooq Abdullah is being held at his residence in the city. In November Ms Mufti was moved from the Chashme Shahi resort in Srinagar to government accommodation in view of the winter.

The government, which has come under fire from opposition parties for the detention of senior political leaders, has said these restrictions are intended to maintain order and prevent terror attacks.

Last week, an image of Mr Abdullah was widely shared on Twitter, drawing sharp reactions that criticised his detention. The detention of local politicians has been criticised by the United States, United Nations and other countries.

"I could not recognise Omar in this picture," West Bengal Chief Minister Mamata Banerjee tweeted, while CPI(M) leader Sitaram Yechury said the photo "points to a very disturbing fact about the central government".