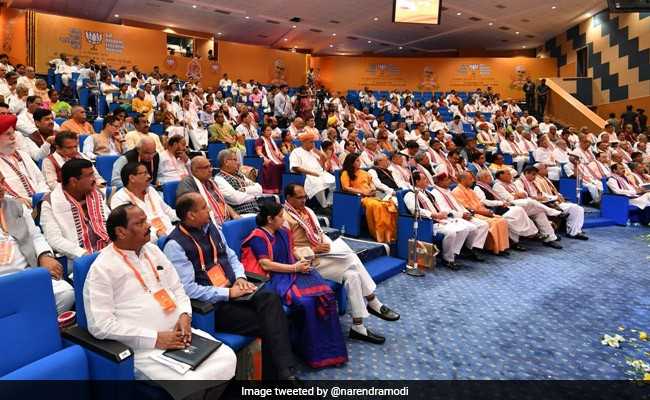 Prime Minister Narendra Modi is scheduled to address the meeting on Sunday.

The BJP in its national executive meeting on Saturday, passed a resolution on agriculture, expressing gratitude to Prime Minister Narendra Modi for taking various initiatives, including raising minimum support price for crops, to double farmers' income.

Addressing the media, Mr Chouhan said farmers were delighted with the government's recent decision to raise the minimum support price for crops.

"Farmers across the country are happy and this rise in support prices is a landmark step in achieving the target of doubling farmers' income by 2022," Mr Chouhan said.

Ninety-nine irrigation schemes had been pending from past many years, out of which 18 were completed by the Narendra Modi government, he said.

On the availability of fertilisers including urea, he said the Narendra Modi government ensured that there was no shortage of soil nutrients for the farmers in the country.

"Similarly in case of electricity, our government ensured its smooth supply for farmers," he said.

All these steps have ensured rise in agriculture produce and raise in the incomes of farmers, he added.