The students were protesting the vice chancellor's decision to invite only a BJP spokesman to the lecture and not speakers with different points of view. 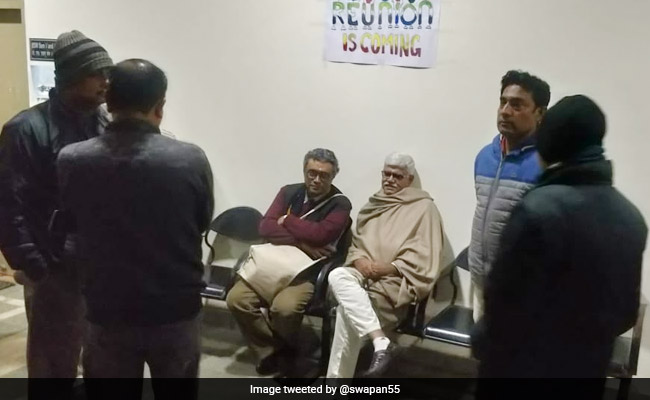 Around 9 pm, the students ended their dharna.

For six hours on Wednesday, students of Viswa Bharati at West Bengal's Shantiniketan kept BJP Rajya Sabha MP Swapan Dasgupta locked up inside a building where he had delivered a lecture titled "CAA 2019: Understanding and Interpretations".

The students were protesting the vice chancellor's decision to invite only a BJP spokesman to the lecture and not speakers with different points of view.

Another thorn in the flesh for the students was that the lecture was held on a day when sections of students had backed the trade union bandh to protest against the Citizenship Amendment Act (CAA), National Register of Citizens (NRC) and National Population Register (NPR).

How does it feel to have a mob attack a peaceful meeting on CAA and intimidation students? This is what is happening to a meeting I am addressing at Vishwa Bharati now. Locked into room now with mob outside.

"There is a howling mob outside itching for confrontation," he tweeted some hours later.

BJP leader Kailash Vijayvargiya put out a video on social media warning of severe consequences if any harm was done to Mr Dasgupta.

Bengal governor Jagdeep Dhankar also tweeted his shock and lament at growing lawlessness, he said, in campuses across Bengal.

Talked to DG Police Virendra Kumar about serious situation of confinement of Rajya Sabha MP Dr. Swapan Dasgupta along with VC Viswa Bharati and many others for several hours, and urged him to take swiftly necessary steps. Such anarchy and failure of law and order is worrisome.

"The incident is reflective of worsening situation of law and order in the State. It is of serious concern that Governance is taking a back seat. Time to take a serious look at this," Mr Dhankar added.

Around 9 pm, the students ended their dharna.

"Clearly, there is an attempt on to saffronise Rabindranath Tagore's university," said one of scores of students at the dharna at the Social Sciences building where the lecture was held.

"But we have voiced our protest and made our point. Also it is late and we are feeling nervous about our security," said another student.

Some students claimed the BJP's local leadership was gathering people to launch an offensive against the protestors.

A section of teachers had earlier written to the vice chancellor Professor Bidyut Chakraborty demanding that the date for the lecture be changed since it coincided with the trade union bandh and instead of a one man lecture, a seminar or panel discussion be held to reflect multiple points of view.

"There is a committee to decide who to invite for the Viswa Bharati Lecture Series. But there is no consultation. The committee was not consulted while inviting Swapan Dasgupta," a member of the committee said.

The teachers also condemned the manner in which the venue was shifted without notice from the Lipika Auditorium to the Social Sciences building. Drama ends in Vishwa Bharati without the confrontation that some protesters desperately wanted

Swapan Dasgupta and the vice chancellor finally left the campus around 10:30 pm.