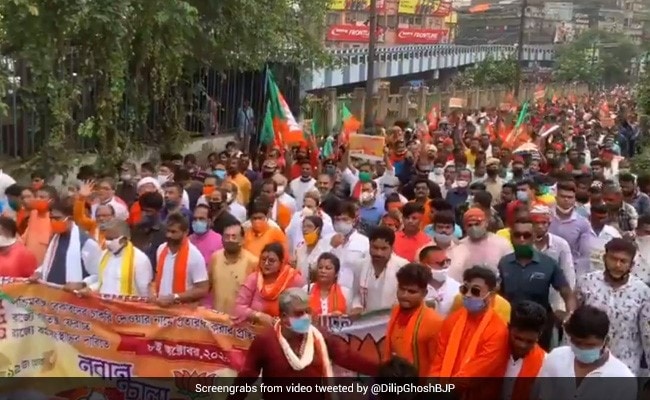 A day after BJP workers fought pitched battles with the police on the streets of Kolkata and Howrah during its march to the state secretariat, senior party leaders such as Kailash Vijayvargiya and Mukul Roy were charged for rioting and violating the Epidemic Diseases Act.

They were charged with unlawful assembly, rioting, destruction of public property, criminal obstruction and assault on government servant and breaching the disaster management act, he said. Some of the sections are non-bailable.

"We have started an investigation," the senior police officer said.

The BJP leadership alleged that the Trinamool Congress government is trying to scuttle democratic movements.

BJP national general secretary Kailash Vijayvargiya said that it is not the first case that has been registered against him.

"Some of the cases filed against me were absurd. I have even been accused of sending children from an orphanage to foreign countries. Such cases have also been registered against (BJP national vice-president) Mukul Roy also," he said.

The senior BJP leader claimed that around 50-55 cases, including that of murder, had been filed against him across West Bengal, while more than 100 cases have been lodged against Arjun Singh.

"This ploy of lodging false cases has been an old strategy of Mamata Banerjee's police," he claimed.

Around 115 BJP workers were killed in the state and the police turned these murders into suicides, Mr Vijayvargiya claimed.

"This is nothing but vendetta politics of the TMC government, which lectures others on values of democracy," he said.

Defying COVID-19 protocols, a combative BJP mustered thousands of its workers on the streets of Kolkata and Howrah on Thursday for a march to the state secretariat over allegedly deteriorating law and order, provoking a crackdown by the police which left scores injured, officials said.

Over 100 BJP supporters were detained and action initiated against them for violating the National Disaster Management Act which bars gatherings and political rallies attended by more than 100 people due to the raging COVID-19 pandemic, they said.