Those Who Skip PM Rally Are Traitors, Said Giriraj Singh. Then He Bunked

The leaders of the opposition parties didn't buy his explanation that he had taken ill as they took jibes at Giriraj Singh. 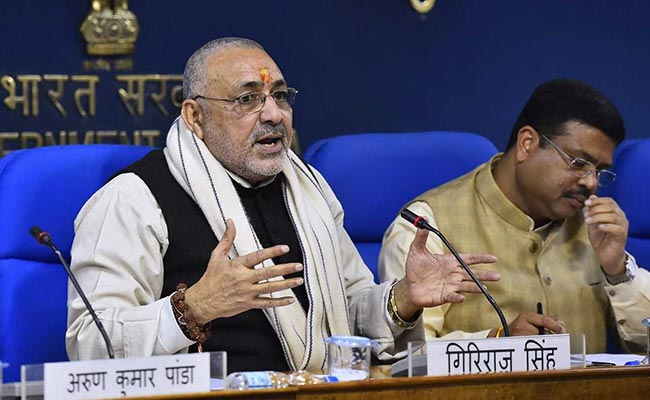 Giriraj Singh had called for ending all ties with Pakistan (File)

Union Minister Giriraj Singh's comment that those who don't attend Prime Minister Narendra Modi's March 3 rally in Bihar would make it clear who supported Pakistan, has made him the subject of the opposition's barbs after he failed to show up at the rally. The leaders of the opposition parties didn't buy his explanation that he had taken ill as they took jibes at the minister.

"It was Giriraj Singh himself who had laid down the yardstick that those not attending the rally would be deemed anti-national. Hence, he is himself a big traitor. For where is he applying VISA for," Bihar lawmaker Pappu Yadav took a dig on Twitter.

A senior leader of Lalu Yadav's party, Vijay Prakash, said that he was an anti-national by his own logic. "Giriraj Singh has proved that, by his own logic, he is anti-national. In any case, the rally was
rejected by the patriotic public of Bihar," he was quoted by news agency PTI as saying.

The National spokesperson of Upendra Kushwaha's RLSP, Fazal Imam Malik, demanded a public apology from the minister. "He should now tell us who must be sent to Pakistan," he quipped, demanding his expulsion from the BJP.

While the BJP said the opposition was twisting his comment, its ally in Bihar, the JDU, has distanced itself from the matter.

In a major escalation, India and Pakistan fighter jets clashed near the Line of Control. An Indian pilot was captured by Pakistan after his plane crashed, after he shot down a Pakistani F-16 jet. The pilot was released after nearly 60 hours of being in Pakistan's captivity.

After the Pulwama terror attack in which 40 CRPF soldiers were killed, Giriraj Singh, a BJP hardliner, had demanded last month that "sporting, cultural and economic" ties with Pakistan must be snapped until the Imran Khan-led country stopped abetting terrorism.

"There should be no cricket with Pakistan. We engage in no sports events with the country till it continues to aid and abet terror. Even families do not dine with each other when they have a feud. So let us have no links with Pakistan, sporting, cultural or economic," Mr Singh, a BJP hardliner, said in his Lok Sabha constituency of Nawada.